Absolutely No-Nonsense Admin, or Anna for short, offers a current account and an app that can issue invoices, and is targeted at creative businesses.

He added: "We'll be launching more services for designers, artists, freelancers, who are busy and don't want to bother with admin."

Technically Anna is not a bank, but instead a combination of a business current account, debit card, app and a hybrid human and AI service that helps small businesses manage their invoicing and payments. The first 2,000 customers to register will get free use of the service for three years.

"We're a digital platform that behaves and acts like a bank," said Singh.

It differs from other financial-technology startups in that it puts the design of its services ahead of technology, he added.

"I would say that the majority of the new challenger bank organisations and fintech businesses is that they are run with technology first, and the only reason I agreed to sign up to do this was that we'd be led by design," he said. 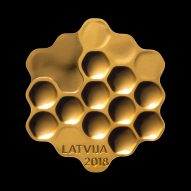 "That's everything from our brand, right through to the way we developed the service, the way the interface works, but also the way in which we engage with our customers."

The logo features the brand name handwritten in terracotta orange, coupled with quirky drawings by Bowsher.

"Traditionally, there's no place for emotion in finance," said Nick Finney of NB Studio. "We wanted the visual identity to embody the opposite of that. As a small-business owner, you're there to do something you love."

Finney said the illustrations were intended to "make Anna an approachable and relatable brand" while the use of terracotta "stands in sharp contrast to the traditional cold blues of banks, corporations and traditional fintech.”

Services designed on paper not a screen

"Before we got anywhere near a piece of code, everything was designed on paper," he said.

It's very, very different from looking at the technology first and then applying some wallpaper over the top that becomes the interface, which generally then has to be redesigned because it doesn't work properly for the customers' needs."

Quirky upcoming features include a "meow" sound that will come from the app each time a payment is made using the debit card, and a desktop cat figurine that will wave each time an invoice is paid.

Earlier this year Starling Bank launched a vertically orientated debit card, to align the payment method's design with how it is used, while entrepreneur Filippo Yacob has created an app to teach children about cryptocurrency.