Ragnarsdottir, who was named Nordic Designer of the Year at the Formex interior design fair in Stockholm, creates objects that sit between home accessories and sculptures.

A departure from the typical minimalist Scandinavian aesthetic, the ceramic-like objects feature a mix of swirling, vibrant colours and playful, imaginative forms. They appear to depict strange landscapes and oceans.

The jury for the Nordic Designer of the Year prize described them as having "a mystic feeling about them that makes one think of Icelandic sagas and to the unique nature of the country".

"At the same time, they carry traces of Chinese aesthetics," they said.

Ragnarsdottir presented a range of objects at Formex, including the delicate Ground and Coral vases, the striped Globule candleholders, the pastel-hued Barrier Screen and the vibrant Husk Table.

The designer told Dezeen she considers herself at the intersection between design, art, craftsmanship and production. She actively explores new creative processes and innovative ways to mix materials.

Her aim is to encourage interactivity between the product and the user. "When people see my objects they often become interested in how they are made," she said. "The material, texture and colours are unfamiliar to them." 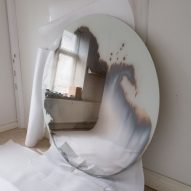 The material she uses requires no kiln or other machinery, as it sets in just 15 minutes. Ragnarsdottir casts the pieces in silicon or latex moulds, then sands and carves them.

The milky white shade of the material makes a great base for colouring, she said.

"Colours are a big part of my work," Ragnarsdottir explained. "I colour and layer the material in specific ways to make a graphical design. In a way, I am painting the objects as I’m building them."

The unique graphical language of landscapes is dominant throughout the designer's work. The technique started a few years ago, when Ragnarsdottir was playing around with latex, exploring how she could manipulate it in various shapes.

"In the beginning I was attaching it to tables, trying to find interesting shapes. From that, I made wooden frames so I could attach the latex in a solid position for casting objects," she said.

The designer plans to continue to experiment with the technique going forward.

"When I start a project, I don’t necessarily search for something that is logistical or rational, it’s more of an exploration into an existing area," she said. "I love working with mixed materials without limiting myself to an existing industry or craft, but taking control in producing whatever I can think of and what the material allows me to do."

The Formex Nova award for Nordic Designer of the Year is awarded annually to a relatively unknown designer working in the Nordic interior design industry, judged to have produced high-quality and innovative design.

The award formed part of the Formex Design Fair, which was held from 21 to 24 August 2018.

Similarly, at Stockholm Design Week back in February, designer Jenny Nordberg experimented with a longstanding technique for making mirrors, by pouring a chemical solution of liquid silver onto a sheet of glass and allowing it to develop.