Raúl Sánchez Architects has refurbished the Sardenya Apartment in Barcelona, creating an open-plan space with different functions defined by black and white tones.

Raúl Sánchez Architects renovated the residential apartment on the fourth floor of a 1970s building in Barcelona to create a two-bedroom flat with a flexible layout for a single man.

The architect removed all but the structural elements of the apartment in the district of Gràcia – a popular neighbourhood of Barcelona known for its street life and great food – to create a largely open plan 75 square-metre bachelor pad that has views that reach the beach.

Along with increasing the sense of space, the architect had to fulfil a brief that included a master bedroom with en suite, a living space, bathroom, room for an occasional guest, and a kitchen for a homeowner that loves to cook.

"I wanted to add a spatial richness to what was essentially a conventional starting point," Sánchez told Dezeen. "By keeping room functions ambiguous, the client could enjoy the apartment in different ways."

The apartment has been divided with two L-shaped non-structural walls used to define the shape of the kitchen and  separate the bedroom from the main space.

"The idea of the layout is based on two L-shaped partitions," Sánchez continued. "These divide the interior yet allow the apartment to have a continual flow." 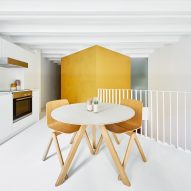 Brass wall trims are used to add colour and help to define the L-shaped zones, with the sink and taps also made from the material.

The master bedroom is separated from the main living area by glass sliding doors, which are made from a combination of matte, translucent and transparent glass in a geometric pattern that aligns when the doors are opened or closed.

The panels don’t reach the ceiling to allow more light into the bedroom.

A black and white colour palette is used as a tool to delineate the flexible living space, with the kitchen almost entirely black to visually separate it from the white living area. The kitchen is At the narrow entrance, a mirror wall is used to create the illusion of a bigger space.

Black is also used for the window surrounds and in the ensuite bathroom, which is predominantly black with Brazilian granite used for the vanity top and shelves.

Raúl Sánchez Architects recently converted two derelict apartments in downtown Barcelona into a house centred around a pair of double-height gold cubes and turned a five-bedroom house in the city into a weekend retreat.