Gage developed the roll of plastic mesh, called VeloMed, to fit over boxes of medication that are then rolled to secure the units together so that many boxes can be transported together.

She found volunteers tended to walk or cycle from villages to a regional medical centre to pick up boxes of medicine and return with them to distribute to those in need.

Typically these can hold seven boxes, whereas with her VeloMed device, which has been shortlisted for a Dezeen Award in the Transport design category, that number can be increased seven fold.

Her project aimed to find a solution to this low capacity that relied on a shift in the manufacturing process, rather than the volunteers having to buy a potentially expensive new product themselves. 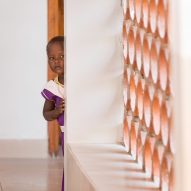 The roll of plastic strip can be included in the shipment of medical boxes to the regional depot. When volunteers arrive to pick up medicines, the strip can be cut to the necessary length, and the boxes slotted into the holes.

The long string of boxes can then be rolled and tied to the bike with string or bungee cord, both commonly used to secure items to bikes in the region and readily available.

The plastic strip is made from low density polyethylene (LDPE) and die cut to create the openings. In future, Gage is hoping to find a biodegradable alternative to the plastic. For now, LDPE has the right amount of tensile strength to hold the boxes firmly but is easily pliable.

Once at the village health hut, the strip can be hung on the wall to provide a record of the number of boxes of medicine that remain, and aid in planning when the volunteers should undertake the next trip.

Gage trialled many different alternatives before settling on VeloMed's simple design. Her initial research saw her create poles to hang the boxes from, cross structures in which to wedge them, and origami shapes to wrap around them. The eventual design drew on the plastic mesh that holds together six packs of beer.

Other projects delivering health solutions in sub-Saharan Africa include a maternity unit in Kachumbala, Uganda, built from local materials that generates its own power, collects water and keeps rooms where mother give birth cool without the need for air-conditioning.