Designed as a capsule collection for Autumn Winter 2018, the unisex trainers feature a tactile felt upper inspired by the work of German artist Joseph Beuys, who was renowned for working with animal fat and felt.

The upper is finished with post-applied felt foxing tape and Converse's license plate logo with lasered-in details. The JWA branding is embroidered on the heel and the inside is left unlined for warmth and comfort.

In the collection's campaign, conceptualised and shot by young artist, Arielle Bobb-Willis, a group of models interpret the textile process that creates felt – matting, condensing and pressing fibers together using force – as a series of movements.

The Felt collection is the brand's second launch in an ongoing collaboration with JW Anderson, the eponymous brand headed-up by Northern Irish designer Jonathan Anderson, who is also creative director of Loewe.

The first, called Toy, was a series of chunky high tops in a bold high-shine patent vinyl with oversized laces designed to mimic the stucco facades prevalent in San Francisco architecture. The Toy collection was showcased earlier this year on the brand's Autumn Winter 2018 catwalk during London Fashion Week.

The second collection is described by Converse as part of the British label's "ongoing exploration of colour and textured material executions", which was demonstrated in the first collection through the use of glossy patent. 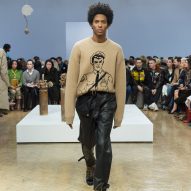 "With an innate ability to elevate the mundane into eccentric and provocative statements, in collection two of Converse x JW Anderson, Jonathan continues to reference his lifelong obsession with art and craft to once again, create a new idea with the iconic silhouette," commented Converse.

"Over two seasons, Jonathan’s approach to the silhouette he has worn throughout his life, the Chuck, has consistently generated concepts that are not only fresh and new, but unexpected."

Felt is available in four colour combinations including pink purple green and olive; grey, orange and black; tarmac, grey and black; and all grey, while laces are available in felt or leather.

Earlier this year, Anderson used the the label's Autumn Winter 2018 show during London Fashion Week to announce his plans to scale back the number of times his brand shows per-season. The move was part of a bid to alleviate the amount of pressure that designers face in order to create up to six small collections a year. As a result JW Anderson now only shows two collections per year.

Photography is  by Arielle Bobb-Willis.