Long associated with Wall Street and World Trade, the densely packed southern tip of Manhattan is now becoming a sought-after place to live. Here are eight towers under construction or recently completed in FiDi that offer high-rise living Downtown.

British architect David Adjaye's first skyscraper in New York is rising towards its 66-storey height in the heart of FiDi. The 244 luxury condos at 130 William will boast views of the city through arch-shaped windows, which will be inverted and doubled in width towards the top. Adjaye believes the building's textured concrete facades will be great for drone photography, once the project completes in 2020.

Set to become the tallest residential skyscraper in Lower Manhattan, CetraRuddy's supertall 45 Broad Street is planned to reach 1,115 feet (340 metres) once it tops out. Thin bronze lines will stretch up the building's slender glass facades, to echo the details of surrounding art deco architecture, and 150 condominiums will be located inside.

Find out ore about 45 Broad Street ›

Uruguayan architect Rafael Viñoly, who was behind Midtown's monolithic 432 Park Avenue, designed this 912-foot (278-metre) tower around two concrete cores that will rise all the way up its centre and be articulated on the exterior. Glazed sections with curved corners will stick out from either side of 125 Greenwich Street, providing its 273 luxury condominiums with wrap-around views.

Find out more about 125 Greenwich Street ›

Construction is wrapping up at 111 Murray Street, with the exterior of the 64-storey tower complete and the external elevator in the process of being removed. KPF, which is working on a multitude of skyscrapers across the city, designed the building's envelope as two glass sheets that curve around its sides, and slope gently outwards towards its top.

Find out more about 111 Murray Street › 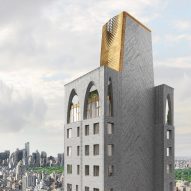 Overlooking the East River, the svelte 60-storey Seaport Residences by Hill West Architects will feature 80 condos when it opens next year. Its glass exterior – currently being installed – is custom engineered, and designed to reflect the colours of the sky and water.

Five hundred curved glass panels will cover Chicago-based, German architect Helmut Jahn's skyscraper 50 West. As part of a mixed-use programme, the 64-storey high rise will include 191 apartments that will enjoy panoramic views of the skyline and harbour.

30 Park Place by Robert AM Stern

FiDi's art-deco towers influenced architect Robert AM Stern's 30 Park Place, positioned above the Four Seasons Hotel and housing 157 apartments within its 926-foot (282-metre) tower. The exterior is clad in limestone and precast concrete, which – along with 130 William – follows a move away from all-glass skyscrapers in the city.

25 Park Row is bulkier than many of the other slender towers on this list, with a stepped form that will contain 110 one- to five-bedroom condominiums across 210,000 square feet (19,500 square metres) of space. Designed by Manhattan firm Cookfox, the 50-storey building beside City Hall Park is expected to complete by the end of 2020.