Designer Laurids Gallée used lengths of cord produced by a historic Viennese passementarie factory to create the curved forms of these lamps.

Gallée took the traditional square cord produced by M Maurer – a factory dating back to 1863 – and shaped it into a series of snaking forms. These are illuminated by simple, geometric lights, which integrate subtle colours.

The designer was one of five paired with different traditional Austrian manufacturers during Vienna Design Week, for a project called Passionswege. The brief was for the designers to put a contemporary spin on the companies' highly crafted products, to show how they can remain relevant in a contemporary market.

M Maurer has a long history, as a former supplier to the Austro-Hungarian empire. It produces over 1,000 different products, including ribbons, cords, tassels and fringes.

"Passementarie is basically everything of a textile that is decorative but not the fabric itself," Gallée told Dezeen. "So all kinds of little ropes, tassels, fringes, everything you can think of."

"They are usually used for things like uniforms or furniture, like on the ends of curtains, but are mostly always details, just decoration."

Gallée's idea was to use M Maurer's square cord, typically used to create shoulder details on uniforms, to form the main body of his lamps. He created five in total, by wrapping the cord into different shapes around the circular bases of the luminaries. 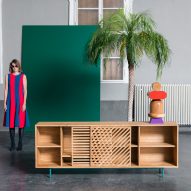 "I chose a product that is quite simple," explained the designer. "It shows that craftsmanship of this manufacturer."

"Normally it only comes in gold or silver," he continued. "They produced it in several colours for me and I thought it was really impressive how the light reflects on it."

One lamp features a vibrant shade of blue, contrasted with a pale pink. Others feature patterned cord in a variety of shades. The colours projected onto the cord matches these tones, although they are not meant to be too noticeable.

"It is supposed to be subtle – it invites the viewer to step closer and really look at all the detail, because you see where all the colours are mixing," said Gallée.

Other highlights from this year's Passionswege include a set of dishes made by Poland-based Studio Rygalik for silversmith Jarosinski and Vaugoin, and handbags made from single cowhides, produced by Vienna-based Burkart Furtenbach for Albert Pattermann.