Designer Yves Béhar has created this graphic in the wake of the mass-shooting at a Pittsburgh synagogue to warn against rising anti-semitism in the US, which he blames on president Donald Trump's "current culture of lies".

The San Francisco-based Fuseproject founder released four illustrations on his Twitter and Instagram accounts yesterday, 28 October 2018 – a day after the shooting at The Tree of Life synagogue.

During the incident, Robert Bowers – who has since been linked to anti-semitic and white supremacy activity online – opened fire during a morning naming ceremony at the synagogue. He killed 11 members of the congregation and injured six, including four police officers.

Béhar reacted with a graphic design bearing the slogan "Lies Cost Lives", written in a bold, capitalised typeface. His intention was to warn against the rise of anti-semitism in contemporary public discourse, as part of heightened right-wing extremism in America.

The designer called out Trump's rhetoric, which he said was fuelling hate with false information, in a caption accompanying his Instagram post.

"The current culture of LIES has to change, or the world will get worse, much worse," Béhar said. "All holocausts, crimes against humanity, and ethnic cleansing start with LIES."

"The nazi who killed 11 people at the Pittsburgh Jewish Synagogue today is angry because 'Jews are funding the caravan of migrants'," he added. "At rallies, Trump repeats this lie that Soros and Jewish bankers are funding protest and migration."

Béhar, who has Jewish heritage, created the images with graphic designer Anthony DeCosta in four colour variations: red, black, white and grey. "LIES COST" is displayed in the same colour in three of the graphics, while "LIVES" has a different hue and a strikethrough. 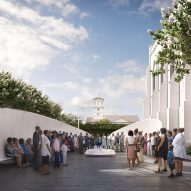 In the fourth image, a black gun points towards the word "LIVES" – referencing this recent shooting and the many more that have take place across America over the last few years. Béhar has encouraged others to share his images to raise awareness of the "danger" of extremism.

"I am sad and upset...so I called my graphic design friend this afternoon, and we worked on words and visuals to express the present danger," Béhar said on his Twitter account. "Feel free to use any of those."

Pittsburgh synagogue shooting follows wave of violence in US

The Tree of Life shooting is among an alarming number of similar gun-related tragedies that have occurred in the US in recent years, including a massacre at Charleston's Mother Emanuel AME Church. Michael Arad, the architect behind New York's 9/11 Memorial, recently revealed plans for a monument dedicated to the victims.

There has also been a wave of violence in US education facilities, which the American Institute of Architects (AIA) responded to with plans for a series of initiatives that will use "the power of design" to help create safer environments for children.

The Pittsburgh attack came just days after a Trump supporter sent parcel bombs to Democratic figures who have been vocal in their public criticism of the president – including holocaust survivor and billionaire George Soros. A white male also killed two people inside a grocery store in Kentucky, after trying to enter a predominantly black church.

Tension is mounting ahead of the country's mid-term elections, which will be held on 6 November 2018.