Architecture studio Claesson Koivisto Rune has worked with Japanese makers to create nine pieces for Tokyo lifestyle store Time & Style, which are based on a house it built overlooking the Baltic Sea.

Villa Widlund, which was commissioned by an art collector and completed seven years ago by the Stockholm-based architecture studio, was focused on to create the objects.

"We came up with this idea of finding inspiration from a seven-year old project," said Ola Rune, one of the three founding architects at Claesson Koivisto Rune. "How could objects come from that, we wondered. So we started playing around."

They had initially been planning to just produce a book, but decided to expand their remit when invited to be part of this year's Designart Tokyo.

The resulting set of objects comprises an ornamental frame, set of plates, another of trays, a chopstick rest, paperweight, bookends, vase, club chair and a book stand on which to place the book.

"The first thing we did was the bookstand because we needed somewhere to place the book, and then we just carried on," said Rune.

From an initial ten ideas of useful designs that related to the architecture of the villa, Ryutaro Yoshida, the owner of the Japanese homeware and lifestyle brand Time & Style, decided on seven to put into production.

"He said he wanted to do seven. From start to finish the process took just two months! You couldn’t do that anywhere else. Then he decided he wanted to do the chair as well, and the vase," continued Rune. 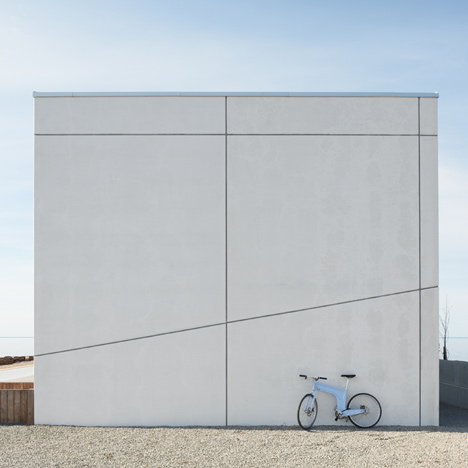 All the products were produced by Japanese regional makers. The 15 centimetre long bookends are made from marble in Sekigahara in central Japan. Each piece of marble takes an hour each to cut, and is polished by hand.

The vase, chopstick rest and plate set are made from Hizen Yoshida ware, using Amakusa pottery stone, a material often used to make porcelain, which gives them a smooth off-white finish.

There are three plates in the set, each a geometric form that slot together to form a rectangle, and can be stacked. "I think these are so Japanese, the way you can play with it," said Rune, who pointed out that a Japanese meal is often served on multiple small plates.

The frame is made in Yokohama from finely cut stainless steel sheets welded together and plated with 24 carat gold in Tsubame-sanjo, the famous cutlery-producing region in Japan. The club chair is acrylic, and made in Hamamatsu.

The tray set is cut from native Japanese wood in Hokkaido, the northernmost island in Japan, where the Time & Style factory is based, as is the book stand. The paperweight is cast in metal in Takaoka, using the lost wax technique.

"The form of each product does not necessarily follow the Japanese style. However, there is a certain presence in a product that was carefully considered and seriously created," said Time & Style.

The pieces were on show at the Time & Style shop in the Tokyo Midtown building during Designart Tokyo, which took place from 19 –28 October, and will soon be available from the brand's stores in Tokyo, Shanghai and Amsterdam.