The project, called Refugio, is conceived as a group of three objects that provide the basic needs of shelter, food and water to different species of solitary bees, in a bid to generate a closer relationship between human-centric cities and nature.

A shelter is designed to function as both a resting place and a nesting place, while a waterer provides a safe space to drink, and a feeder contains food, for areas without enough flowers.

Solitary bees do not live in colonies or in a hive, do not have a queen and therefore do not produce honey or wax. Most are not aggressive and many don't even have a sting.

Dedicating most of their time to collecting pollen, solitary bees are potentially the most efficient pollinators in nature, with one particular species of solitary bee, the red mason, being equivalent to 120 worker honeybees in the pollination it provides.

"When we talk about bees we usually imagine the European honey bee (Apis mellifera) when in reality around 90 per cent of the bee species are considered solitary," explained Gabriel Calvillo from the Mexico City-based studio.

"The fact that solitary bees do not generate any 'consumable product' for humans has meant that they are not given much attention, but recent studies point to the fact that they are possibly the most efficient pollinators in nature."

In a bid to attract the endangered insects, the design of each structure was based on the types of refuge and nesting sites that solitary bees naturally seek out both in nature and in urban spaces, as well as the "insect hotels" found on many farms.

The shelter consists of multiple modules made from unfinished pine and teak wood covered with natural oil, while the roof is ceramic.

Each structure is complemented by a cultivation manual that passersby can read to find out how they can create their own sanctuaries for solitary bees.

"One way to increase the population of solitary bees is by creating flower gardens in farms, gardens and parks. These gardens or sanctuaries can be complemented with the use of shelters, waterers and feeders," said Calvillo.

"In times when more than half of the population lives in cities, we seem to fight to exclude nature from our lives," said the studio.

"The plants that grow between cracks of concrete are aesthetically despised, trees are cut down to build parking lots and shopping centres are built where parks once stood." 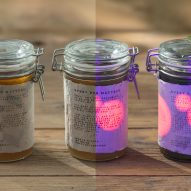 "Possibly, insects are our main objective when we talk about excluding nature from our lives. Insecticides, repellents and traps are used massively around the world every day," it added. "We forget that insects play an indispensable role in the environmental balance."

The designers were inspired to create the shelters after reading an article published by Conservation Biology titled The City as a Refuge for Pollinating Insects, which discussed how lots of pollinating insects have found refuge in cities, where they can find many flowers in gardens, parks and urban farms.

"Unlike many rural places where monocultures and the use of pesticides are the norm, I think it is very interesting to consider how cities can also play a role in the conservation of biodiversity," Calvillo told Dezeen.

MaliArts are not the first design studio to gear their efforts towards saving endangered insects. The Warsaw branch of Saatchi & Saatchi and bee charity City Bees came together to create a glucose-rich paper touted as an "energy drink for bees" to help prevent them dying of exhaustion as they search for flowers.

Photography is by Sergio López.