A glucose-rich paper touted as an "energy drink for bees" could help prevent the endangered insects dying of exhaustion as they search for flowers.

Bee Saving Paper has been developed by the Warsaw branch of Saatchi & Saatchi and bee charity City Bees to reverse the decline in bee populations caused by industrialisation and pesticide use.

The paper is impregnated with glucose and honey plant seeds, giving bees a boost of energy that allows them to fly longer distances in search of flowers.

In urban environments where sources of pollen and nectar for bees are scarce, bees can end up dying from exhaustion as they search for food.

Saatchi & Saatchi IS Warsaw claims that 222 out of 469 bee species in Poland are on the verge of extinction.

It suggests the paper could offer a solution. It describes it as "an innovative, biodegradable material that can be used for many purposes and works like an energy drink for bees".

Bees are attracted to the paper because it is patterned with dots of water-based UV paint. The insects, which can see in the ultraviolet spectrum, read these as flowers.

Saatchi & Saatchi IS Warsaw believes the biodegradable paper could be used to make coffee cup sleeves, tote bags, car-park tickets and picnic plates, giving these disposable items a second life and even making it useful to litter.

"We've managed to develop and produce what is probably the first paper nature would not only like you to use, but maybe even to drop," said Saatchi & Saatchi IS Warsaw's Tomasz Bujok and Anna Gadecka, senior creatives on the project.

"Currently, we are focusing – through beesavingpaper.com – on seeking partners who, just like us, care about the future of bees. We know our innovation won't solve the worldwide problem of the declining bee population by itself, but we hope we'll at least make people realise how important bees are to us."

The creatives said their invention passed a field test with beekeeper Łukasz Kaczorowski, who had lost more than 95 per cent of his hives.

In addition to giving passing bees a bit of a boost, the paper contains seeds of purple tansy, or lacy phacelia – an apian favourite – which they will collect and redistribute on their journeys. Despite containing glucose, the paper is not sticky to the touch.

Globally, bees are the most important pollinator of food crops and are vital in sustaining the planet's ecosystems. UK nonprofit organisation Friends of the Earth says that the global market value linked to pollinators is between £176 billion and £418 billion each year. 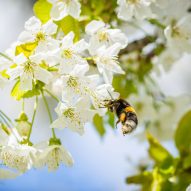 Artist Michael Candy proposed a method of artificial pollination using 3D-printed flowers, designer Neri Oxman created an artificial apiary where it is spring year-round, while US supermarket chain Walmart has proposed autonomous robot bees as an alternative for the future.