Through his Medulla project, Kwaning sought to find new applications for soft rush – a weed, which grows in tufts in wetland habitats like wet woodlands, marshes, ditches and grassland – by separating the pith from the fibres.

Each year in the Netherlands state forestry removes thousands of kilos of the plant, which is then fermented and turned into biogas. Alternatively the fibres are used to improve the structure of agricultural soil that contains a lot of sand.

Kwaning's research found that the fibres can be developed into materials like paper, corrugated cardboard, rope, non-wovens and textiles, while the pith of the soft rush can be used as a foam material.

The pith's lightweight, shock-resistant and insulating properties make it suitable for use as an ecological packaging material that can be applied as tangled noodle strings or as a compressed foam blocks.

The foamy pith doesn't require any bonding additives can be compressed in different densities, which makes it suitable for use as a lightweight sheet material that can be applied in furniture production.

Kwaning has demonstrated the plant's various uses by using the material to create a noodle-like packing material, packaging papers made from the soft rush fibres, two packaging boxes and a set of five storage boxes that double as a side table. 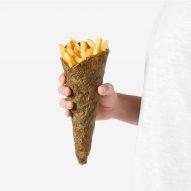 The storage boxes are made entirely from compressed soft rush pith. Kwaning compares the lightweight sheet material to a lighter version of the construction material MDF but made without a binder.

The designer compressed the soft rush pith at an even lower density to create a lighter version of the compressed material that he used to make one of the storage boxes.

"This box could be a ecologically friendly replacement of the polystyrene packaging boxes," suggested Kwaning.

The second packaging box is made from a corrugated card made from the soft rush fibres. The box contains foamy strings, which Kwaning said could be a replacement for polystyrene packaging beans.

Medulla was on show at at the Design Academy Eindhoven graduate show at this year's Dutch Design Week, which ran from 20 until 28 October. Other showcased graduate projects this year included a collection of ceramic tableware for visually impaired people.