Dezeen promotion: Otis' Sky Build lifts, which climb up a building as it is built, are enabling the efficient construction of the 278-metre-tall Twentytwo skyscraper in London's financial district.

Designed by London-based PLP Architecture and developed by AXA Investment Managers – Real Assets in partnership with Lipton Rogers Developments, the 62-storey tower will be the tallest building in the City of London when it completes in 2019.

The skyscraper will be occupied by 12,000 office workers, who will have access to a fresh food market, gym with London's first climbing window 125 metres above the ground, business club and bike park. Twentytwo will also have a public viewing gallery.

Two of Otis' Sky Build lifts were installed at the site at the beginning of construction and have been used throughout the build. They will even remain in the building when it completes.

The self-climbing lifts can be installed once construction has reached the third storey within a building's lift shaft. As the lift shaft is built and rises higher, the Sky Build lift is raised within the shaft so that it can used throughout construction.

"We've developed and built the safest, fastest self-climbing elevator used for construction within the industry" explained Kurt Frei, associate director in field support for global major projects at Otis, in a video explaining the lift. 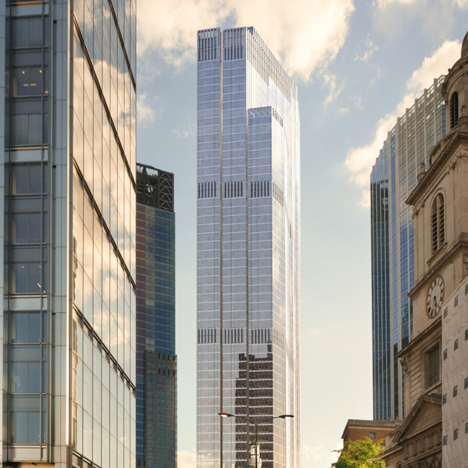 PLP Architecture gets go-ahead for second tallest skyscraper in London

The system works by using two platforms that are locked within the shaft from which the lift is hung. After construction of a floor has taken place the lift "jumps" up the shaft.

The upper platform is unlocked from the shaft and hydraulically raised. It is then locked in place at a higher level. The process is then repeated for the lower platform, to raise the whole mechanical system up a storey.

"The simplest way to explain it is like a caterpillar basically jumping up the building; when you get to the top you remove what's not require , lock it into the building and it finished," says Keith Rayfield, Twentytwo project director at Otis UK, in the video.

When construction of the skyscraper is complete, the lifts will be converted into elevators for the building's occupants.

"The Sky Build is a unique technology that allows us to use a final elevator as a field tool, and this field tool will jump from floor to floor without the need of a crane," adds Bertrand Rotagnon, new equipment director at Otis UK & Ireland.

As the lift is within the building, rather that constructed externally, the system allows the quicker, more efficient movement of crews and tools within a construction site. According to Otis, at Twentytwo this has taken place around eight times faster than it would using a standard goods lift.

Find out more about the Sky Build lift on the Otis website, and more about Twentytwo on its website.