German firm Behnisch Architekten has renovated a 1970s urban academic building in Oregon, and created an addition that consists of "shifting" wood-clad boxes and a glazed atrium.

The Karl Miller Center houses the School of Business at Portland State University. The building is located within the University District in downtown Portland, just a few blocks west of the Willamette River.

The project entailed renovating a decades-old, six-storey building and creating a five-storey extension – along with adding an atrium to connect the two structures. The project was designed by the Boston office of Behnisch Architekten, with local firm SRG Partnership serving as architect of record.

"The new School of Business appears as two structures sharing a city block – the renovated existing building and a new dynamic, shifting addition, connected with a striking glass atrium," said Behnisch Architekten in a project description. "It is designed as a social hub and creates a pedestrian-friendly space for students and the greater university community."

The addition consists of irregularly stacked boxes, with certain portions cantilevering over the site. On both the west and east elevations, the fourth level of the building pushes outward, forming a canopy over entry plazas at ground level. The boxy masses are supported by tall, slender columns. 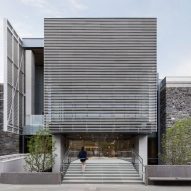 The addition's wood cladding draws reference to the forests of the Pacific Northwest. Exterior walls are wrapped in Alaskan yellow cedar, along with large stretches of glass that usher in natural light.

The original building, designed by Yost Grube Hall, opened in 1979 and was expanded in 1989. It totals 100,000 square feet (9,290 square metres). The earliest portion of the building had metal siding and ribbon windows, while the addition was clad in brick.

In the recent overhaul, the entire facade and all interior elements were removed. The interior was reconfigured in order to bring in more daylight and to create more open, flexible spaces. On the exterior, walls were re-clad in horizontal strips of stainless steel and mill-finished aluminium, giving the building a distinctive look.

Connecting the new and old buildings is an atrium with a slanted glass wall. Bridges and walkways stretch across the open volume, creating a dynamic atmosphere. The space is further animated by brightly painted walls, ceilings and columns.

In the centre of the atrium, a large stair not only accommodates circulation, but also serves as a place for students to congregate, study and watch presentations.

"Flexible, student-focused informal learning spaces are evenly distributed throughout the building to act as social anchor points, helping to elevate the space beyond a transitional corridor," the team said.

The Karl Miller Center has a number of sustainable features, including regionally sourced wood, green roofs, low-VOC materials, daylight sensors, and passive cooling in the addition and atrium. The project has earned the highest level of certification, LEED Platinum, from the US Green Building Council.

Behnisch Architekten was founded in 1989 by the late German architect Günter Behnisch as a branch of his main studio. His son, Stefan Behnisch, took over in 1991. The firm has offices in Stuttgart, Munich and Boston.

Photography is by Brad Feinknopf. 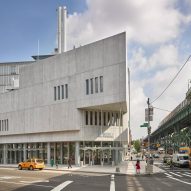