American architecture firm Johnston Marklee has completed a cultural building in Texas, with a white linear form punctured by courtyards.

The institute showcases modern and contemporary drawings from the private collection of John and Dominique de Menil.

With offices in Chicago and Los Angeles, Johnston Marklee was selected to design a new home for the drawing institute in 2012.

Measuring 30,146 square feet (2,800 square metres) across a single storey, the building has a simple white exterior and is peppered with courtyards.

"The Menil Drawing Institute is the first freestanding facility in the United States created especially for the exhibition, study, storage, and conservation of modern and contemporary drawings," said a statement from the museum.

The architects opted for an "intermediate scale" for a museum building, in response to the works to be displayed inside and other structures in the vicinity. 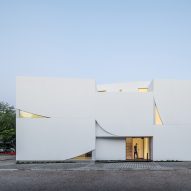 The building is surrounded by a grassy lawn and oak trees, while a trio of gravel courtyards are found within its envelope. Landscaping for the project was completed by Michael Van Valkenburgh Associates.

The courtyards and a series of smaller diffused skylights naturally illuminate the galleries, housed within box-like volumes linked by a thin, white folded-steel roof.

From the edges of the building, sections of the roof angle down towards the tree-planted courtyards – a feature made more prominent by open corners.

"As visitors approach and enter the Menil Drawing Institute, the design naturally and incrementally reduces the intensity of the sharp Texas sunlight by means of the canopy of the surrounding trees and the roof canopy of the building," said the statement.

"The roof appears to float in the landscape when viewed from a distance, pierced intermittently by the treetops."

A central "living room" runs from the west and east entrances, and serves as the institute's circulation spine. To the south are exhibition galleries, while offices, study rooms and a conservation lab are positioned to the north.

Some rooms feature angular ceilings formed from triangular facets, while others have gabled pitches.

"The design achieves an unprecedented interplay between indoor and outdoor space in a facility for highly light-sensitive works on paper," said the statement.

The masterplan for the Menil Collection campus was overseen by David Chipperfield, who was selected for the project in 2009. The Menil Drawing Institute is set to open to the public 3 November 2018.

Photography is by Richard Barnes. 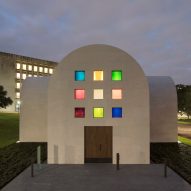