The vases and bottles, which feature a smooth translucent finish, have been fixed in four different compositions on Santafiore stone tiles and are currently being presented in an exhibition called Silence of the Colours at the Venini boutique in Milan.

To make the limited edition pieces, Thun adapted cold-processing techniques that have qualities in common with the sculpting. The vessels are mouth blown before being lightly sanded until the form and surface texture possesses a level of perfection more typical of plastic.

Within the four compositions, Thun said he sought to create a perfect balance of shapes and chromatic shades contrasting the rough, porous surface of the base with the smooth, satin finish of the glass. 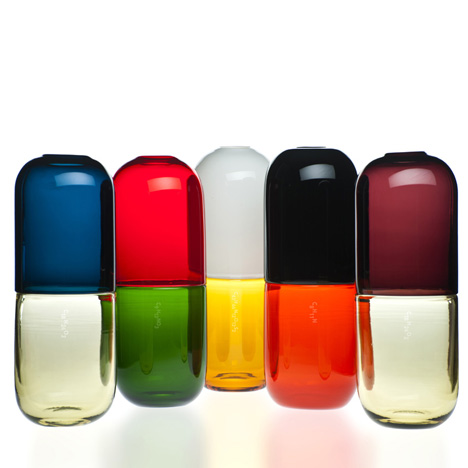 The colours selected by Thun are coordinated according to cold and warm shades. Colder palettes include purple, bluemarine and taupe; and blue burgundy and taupe. The warmer compositions are made up of grey, yellow and orange; and amber, green apple and taupe.

"For many years I have observed the Murano craftsmen blowing glass; for many years I have tried to understand what happens in those fractions of a second," explained Thun, who launched his own brand of customisable furniture and lighting during Milan design week in 2016.

"I would like for the complexity of the blowing to produce an archaic feeling, just like the painting of the early Novecento," said Thun.

Venini explained the meaning of the exhibition's title, The Silence of the Colours: "The colours, in fact, are rich in suggestion, but they are captured in the intensity of an instant; the colours speak, without speaking, in an emotionally charged impression, to tell of nearly a century of experience in the history of glassmaking." 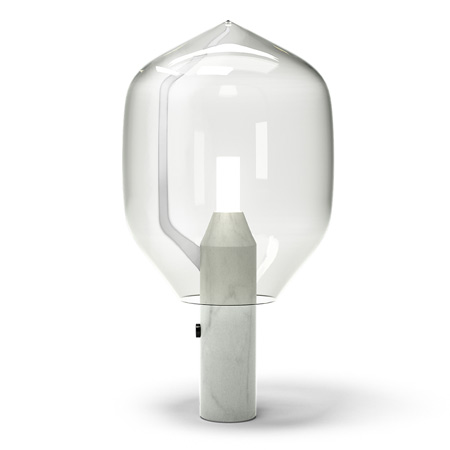 In 2012, the company teamed with Italian designer Fabio Novembre to create a series of vases blown in two colours to imitate pharmaceutical capsules with chemical symbols etched on their sides.