Studio Joanna Laajisto has created an office for a Finnish advertising agency inside a bread factory with six-metre-high ceilings, in Helsinki.

Spread across an old bread factory with six-metre-high ceilings and 1,500 sqaure metres of floor space, the office is divided in to public and private areas.

The agency, named Bob the Robot, wanted the office to feel like a private members club to give their employees and customers a feeling of exclusivity.

In the public areas, such as lobby and café, both customers and employees can freely mingle. The meeting rooms are also located in the public section along a long corridor. The private areas, which are reserved exclusively for employees, are placed at the back of the space and on the second floor.

"Today's creative office employees like to change the place and way they work multiple times a day, so it is important to accommodate this into the office design," said Joanna Laajisto, founder of Studio Joanna Laajisto.

The studio made sure to include areas for team work, private meetings and one-on-one conversations across the space.

Areas with electronic tables for team work are located in the private area while a large lounge area with different seating arrangements caters to employees who want to work individually, hold team meetings or have confidential conversations. A café space also provides a place for working and socialising.

With the concept of a private club at the forefront of the project, Laajisto wanted the interior to break away from elements that make up a typical corporate office environment. 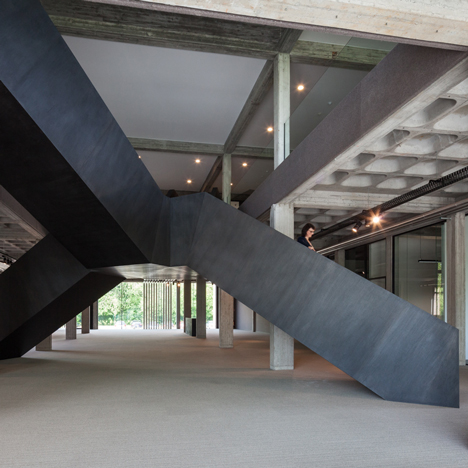 To do this, the studio incorporated materials and features more commonly used in the hospitality industry than an office space. These include large custom chandeliers in the public areas and fluted glass panels that were used as meeting room walls or space dividers.

"We like the idea of hi-lo design; high-end details side by side with lower end materials," said Laajisto. "For us it was fulfilling to use marble pieces with defects that normally would be left unused. This method also helped with the overall budget."

In keeping with the space's industrial look, the studio used black-stained MDF paired with low-grade carrara marble throughout the space on elements such as the reception desk and stairwell.

"Budget is always an issue when designing anything, but our design philosophy is that even a tighter budgets should not effect the quality and longevity of the project," commented Laajisto. "You just need more creative solution."

To save money, the studio tracked down second hand designer furniture so as not to compromise on quality.

"Businesses grow fast and often move in five-year increments," added Laajisto. "This doesn’t mean that everything should be changed each time. I really want to promote that furniture should be considered as an investment to the future in a business just like people are starting to do more and more in their private life."

Previously Studio Joanna Laajisto completed a retro-themed bar in Helsinki that takes its design cues from 1960s and 1970s disco music, as well as an "elegant, unconventional and human" workspace for design studio Fjord.