As part of our Bauhaus 100 series celebrating the school's centenary, the latest Dezeen competition offers five readers the chance to win a night stay for two people at the Bauhaus school building in Dessau.

This competition is now closed. Congratulations to the winners, which are Alice De Smet from Gent, Belgium, Ander Arregui from Izoria, Spain, Martin Giles from London, England, Alistair Riddell from Victoria, Australia, and Brendan Jacka, from Montreal, Canada.

Winners of the competition will stay in a recreated studio, where everything from the floor plan and the materials to replicas of the original furniture has been carefully considered to reflect the atmosphere of the Bauhaus, as it was in its prime.

Completed in 1926 the dormitory building was built as part of the new school designed by Walter Gropius in Dessau, after the Bauhaus' move from Weimar. 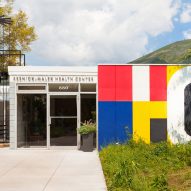 Eight Bauhaus buildings where you can spend the night

The studio building, which is named Prellerhaus after the painter Karl August Louis Preller, contains 28 rooms – a mixture of single and double occupancy – where Bauhaus students and masters stayed.

Since its refurbishment some of the rooms have been decorated in homage to their former inhabitants, including Alfred and Gertrud Arndt, Josef and Anni Albers and Franz Ehrlich.

Founded by Walter Gropius in 1919, the Bauhaus was the most influential 20th century design school. The school in Dessau, designed by Gropius, is perhaps the most recognisable building that reflects the ideals of the Bauhaus.

To mark the centenary of the school's founding, we've created a series of articles exploring the school's key figures and projects.

Five readers will each win a one night stay for two people. You can also book a room online.

Competition closes 9 December 2018. Five winners will be selected at random and notified by email, and their names will be published at the top of this page. Stays are strictly subject to availability and are only valid until 2020. Images courtesy of Yvonne Tenschert unless otherwise stated.