US firm wHY has completed an exclusive members-only co-working space inside a building by Belzberg Architects in Beverly Hills, geared towards celebrities and famous professionals.

The Spring Place workspace-cum-social club provides a hub for members to work, dine and entertain, as well as attend and host events.

The second location in Beverly Hills – a notorious haunt for the rich and famous – follows the company's first outpost in New York City's equally star-studded TriBeCa neighbourhood, which opened in 2016.

"Spring Place (in Beverly Hills) was conceived for those who shape the business of contemporary culture, and with the thriving fashion and arts' scene in LA, it was the obvious location for our second US club," said Francesco Costa, co-founder of Spring Place with Alessandro Cairati Crivelli.

With offices in LA and New York, wHY decorated the interiors of a three-storey building for Spring Place Beverly Hills, which spans 40,000 square feet (3,716 square metres). 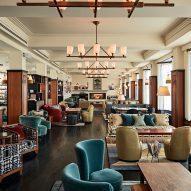 Located in between the Waldorf Astoria and Peninsula hotels on Wilshire Boulevard, the building designed by Santa Monica-based Belzberg Architects in 2014 is wrapped in floor-to-ceiling windows, with coloured lights amplifying its exterior at night.

Inside, the design includes light wood and pale tile floors, with white walls and mid-century furnishings. Several features created by Belzberg Architects were retained, including a sculptural wooden staircase that surrounds a central atrium, and a conference room with a similar design language.

In one area, a series of oval-shaped work tables with green chairs is separated from a couch area, with black chests that serve as dividers.

Another meeting room features home-like furnishings rather than typical office pieces, including an upholstered sofa and two armchairs – all olive in colour.

The green tones and warm woods combine to create a cosy atmosphere, with a combination of vintage and contemporary pieces. Other furnishings were custom-designed by wHY.

"Our idea for Spring Place in Beverly Hills was to fuse the best of east and west coast designs with a global sense of place," said wHY founding partner and creative director Kulapat Yantrasast. "I wanted the approach to be eclectic, fun and personal."

On the roof deck, also part of Belzberg's original design, various lounge areas are formed by outdoor sofas and chairs in green, white and grey. A covered restaurant features darker colours like dark purple, grey and brass for a more intimate decor.

Photography is by Andrew Rowat.