The wavy bands that will stretch up this residential tower, which US firm Studio Gang has designed for Honolulu, are based on the shapes of sugarcane plants.

Columns will run up between the windows and balconies of the 41-storey Kō'ula skyscraper, which will be built as part of the Hawaiian capital's huge waterfront development called Ward Village.

The bands are curved to maintain views of the coastal surroundings from the 565 residences inside. The undulating shape "pays homage" to the sugarcane plants that once grew in the area, according to Studio Gang.

"The exterior design creates a fluid, waving facade giving way to residences that bend to the coastline for stunning ocean views, natural light and breezy trade winds," said the firm in project description.

The wavy design follows a series of similar residential buildings that the firm has underway in America. These include a curvaceous tower in Los Angeles' Chinatown, a high-rise in San Francisco with twisting bay windows, and a scalloped concrete condo tower for New York. 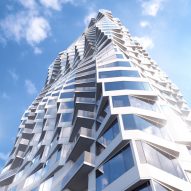 Studio Gang's Honolulu tower on Queen Street will sit between the Ward Entertainment Center and the Central Plaza gathering space in the Ward Village, where architecture firm Woods Bagot has converted part of a 1960s office building into a sales centre for new residences in the development.

Kō'ula will include a public porch that leads to a courtyard, offering a new entrance to the plaza. Restaurants and shops will occupy the lower level of the building to also link with this outdoor public area.

Residences will occupy the floors above in a range of layouts, including studios, one-, two- and three-bedroom apartments. Sales are set to launch late 2018.

Canadian firm Yabu Pushelberg, which counts some of the world's biggest luxury brands as clients, is designing the interiors of the building.

Renderings show that these will include natural materials, colours and textures, and an abundance of greenery. Among the spaces is a communal area with stone flooring, huge slatted wooden doors and large windows.

A typical residence will be decorated with pale wooden flooring that matches cabinetry, doors and the kitchen island, with brassy and marble-like details. Open-plan dining and living rooms will boast expansive views of the surroundings.

Kō'ula residents will also have access to a swimming pool, where trees will be planted between slatted wooden volumes that run alongside the pool to provide private sunbathing nooks.

Studio Gang, which has offices in Chicago, New York and San Francisco, was established by Jeanne Gang in 1997.

Earlier this year, the architect announced that she had closed the gender pay gap at her firm and called for others to follow suit and "fix pay inequity".