Locally based studio Valdemar Coutinho Arquitectos designed the building as a sports facility for use by the local Pedro Barbosa School, as well as by the community of Viana do Castelo.

Named the Atlantic Pavilion, the sports facility is located on a street facing the waterfront called Avenida do Atlântico, in the municipality of Viana do Castelo.

A restricted budget and the need for easy maintenance going forward informed the design of the building, which is guided by the principles of brutalism in its use of concrete both externally and internally.

Working within the predefined constraints, the architects aimed to develop a proposal that  offered "an appealing dynamic and humanised image," they said.

The building occupies almost the full extent of its compact site. It contains a 650-square-metre sports hall that adjoins a perpendicular block housing four dedicated changing areas – two for players and a further two for officials.

At the corner where the two blocks connect, an entrance pavilion provides a distinctive presence within the heterogenous streetscape.

Recessed windows are protected from direct sunlight but ensure plenty of natural illumination is able to enter the interior. 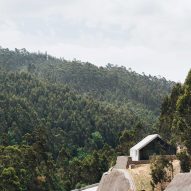 The angular form also echoes the shape of the sports hall's main elevation, which slopes to free up pavement space below and follows the rake of the bleachers inside.

Visitors are welcomed into a space where up to 80 people can wait to enter the sports hall's seating area. The foyer also contains a reception desk and a small bar area, and provides access to the toilet facilities.

The building is predominantly monochrome in its material palette, with the concrete surfaces complemented by panels of grey stone that are used to clad the elevations of the sports hall and the entrance pavilion's lower storey.

"The general tone of the building is grey, which reminds us of the beautiful grey sea," said the architects.

In the foyer, artist Mário Rocha was commissioned to create embossed tiles featuring motifs inspired by the crustaceans and algae found across the local beaches.

Inside the sports hall, the exposed concrete walls and structural columns lend the space a robust and functional feel, which is offset by the warm, knotted timber used to form the roof structure.