A kaleidoscopic solar roof tops the courtyard of Foster + Partners' latest Apple Store, which opened on the Champs-Élysées in Paris over the weekend.

Located on the corner of Champs-Élysées and Rue Washington, the store has been built within what is described by Foster + Partners as a "quintessential Parisian apartment".

The store is designed to carefully blend the surviving original detailing with new contemporary and light-filled interiors.

Entered via a 19th century Parisian passage, with display spaces on either side, customers arrive within a newly revived courtyard dotted with large mature trees.

The courtyard is sheltered by a Kaleidoscope solar roof-light made up of mirrored pyramids that reflect dappled sunlight onto the internal facades and floor below.

When viewed from below, the solar panels that cover the roof reflect fragmented images of the surrounding buildings, which the architects said is a reference to the Cubist tradition.

The reflections change throughout the day and night as customers move through the building.

The courtyard will play host to Apple events, which will include entertaining and educational talks and lectures by experts from various fields.

"The courtyard pulls the vitality of the historic promenade deep into the building, creating a unique interior experience that is full of life and energy," commented Foster + Partners.

A series of calmer spaces with green walls and seating sit adjacent to the courtyard providing a place for visitors to pause and rest.

Inside the building, a restored original timber and marble grand staircase, known as an escalier d’honneur leads up to the floors above.

Originally designed as a collection of bourgeois appartments, the building has gone through several incremental changes throughout its lifetime.

The architects wanted to revive the building's original spirit by restoring the detailing and interconnected spaces of the 19th century Parisian apartment, with later additions intentionally removed and replaced with contemporary spaces.

"This layered transference of scale and style allows visitors to appreciate the history of the location, as they pass through the display areas in different rooms, catching framed glimpses of the historic fabric from the contemporary spaces and vice-versa," said the architect. 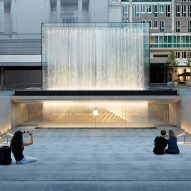 Each of the store's rooms has balconies that open onto the tree-lined Champs-Élysées with its Beaux-Art style buildings and views of the Eiffel Tower.

"This is one of the most unique Apple flagships is the world, located along the world’s most beautiful avenue," said Stefan Behling, head of studio at Foster + Partners.

"In true Parisian style it is rich in texture and envelopes a range of experiences that stimulate your senses," he continued.

"This is emblematic of the idea of juxtaposition runs that throughout the interior spaces, bringing together the historic and contemporary, interior and exterior, and ground and sky."

The architects also reported that the building was previously home to Brazilian inventor and aviation pioneer Alberto Santos-Dumont.

Regarded by many as one of the first people to fly an airplane, Santos-Dumont contributed greatly to the development of the aviation industry as we know it today.

"Apple Champs-Élysées celebrates the vision and foresight of these pioneers by creating a space that encourages creativity and innovation in all walks of life," said the architects.

The store marks ten years of collaboration between Foster + Partners and the Californian-headquartered technology company. It's design, Foster + Partners said, is the result of a close collaboration the architects and Apple's teams led by Sir Jonathan Ive, chief design officer and Angela Ahrendts, senior vice president of Retail.

"My collaboration with Foster + Partners is now in its tenth year and I am thrilled we have completed such a special project together, " commented Ives.

"I love Paris. The charm and allure of the city is encapsulated by the scale and energy of the Champs-Élysées, and Apple Champs-Élysées is an extension of that vitality, wrapped within a historic envelope, with a careful juxtaposition of new and old."

The British firm also completed Apple's store in Macau, China, this year which features tall shoots of bamboo that rise through its central atrium.

Photography in by Nigel Young.