Our latest Dezeen x MINI Living video investigates a 3D-printed house, which was built in a week, onsite in a Milan square, using recycled concrete.

Engineering firm Arup and architecture studio CLS Architetti collaborated on the project, which was exhibited during Milan design week this year.

Named 3D Housing 05, the structure was printed within Milan's Piazza Cesare Beccaria square in just a week. After construction the 100-square-metre house contained a living area, bedroom, kitchen, bathroom and was topped with a roof terrace.

The house's curved walls were printed by a compact and mobile robot, which can print a single wall in 60 to 90 minutes. The machine was designed by Cybe Construction – a 3D-printing company from the Netherlands

The walls were printed with a special mix of recycled concrete, using debris from demolition sites, which cures in five minutes. The mix was developed by one of the world's largest suppliers of cement Italcementi and can be recycled after a building has been demolished.

CLS Architetti told Dezeen that the project aimed to demonstrate that with 3D-printing technology housing can be built quickly and cheaply.

According to Massimiliano Locatelli, principal architect at CLS, the cost of 3D printing a single square metre is currently €1,000 (£890) half the average price of traditional construction. Locatelli predicts that as the method becomes more advanced, this figure will drop to around €200 to €300 (£178 to £267) per square metre.

3D printing is efficient as the printer works quickly and reduces the amount of man hours put into a single building. The process also only uses the exact amount of raw materials needed for each component, thereby reducing waste produced during construction.

The house exhibited during Milan design week was only a prototype, however, CLS Architetti aims to improve on the building method to make it sustainable for building long term housing. 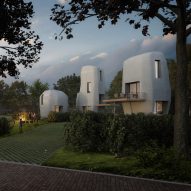 A variety of building projects using 3D-printed technology have been unveiled this year. Eindhoven-based Houben & Van Mierlo Architecten are currently building what they claim is the world's first 3D-printed house to be made commercially available to rent, while Dutch robotics company MX3D exhibited a 3D-printed steel bridge during Dutch Design Week this year.