Standing alone in an open field fringed by woodlands near the village of Lenham in Kent, the Process Gallery was designed to be an "inquisitive piece of architecture".

The photography studio comprises two elements: a low volume housing a workspace and small gallery, and a tall X-ray chamber, linked by a heavy metal door.

Together, they are designed to "expose" Veasley's artistic process to the public, from the capture of X-Ray images to their post-production and eventual display.

"We decided to put the gallery in the same position and east-west orientation as the former big shed", said Hollaway, "using robust but contemporary material such as corrugated metal cladding."

The low, corrugated metal-clad gallery volume is defined by a large picture window inspired by a camera lens, articulated externally by an angled wooden reveal.

The tall pyramid X-Ray chamber, reminiscent of Kentish Oast houses, takes its form from the splay of the X-Ray machine, which can be hoisted up and down the space – "the higher the X-ray machine, the larger the object which can be captured", explains Hollaway.

"In the same way the form of Oast houses was driven by their function, this approach isn't any different"

The firm worked with an X-Ray expert to ensure the space's walls would offer sufficient protection from the rays, which required them to be 600mm thick at the base, thinning as the structure rises. 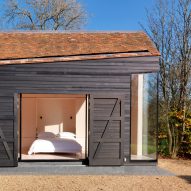 Poured on-site in two days, the smooth formwork of the chamber has lent the concrete a glossy sheen in places.

"It has been designed as a cold space without insulation, so like a cathedral it is cool in the summer and cold in the winter", said the architects.

At its peak, a small skylight draws light down, and the exterior is emblazoned with "Nick Veasey Studio", beneath a radioactive symbol.

"Nick Veasey's work is a function of the result of the X-Ray process, an honest revealing of what is beneath the surface", said Hollaway. "We wanted this architecture to be equally honest and use a very simple palette, such as polished concrete floors and a ply-clad interior".

Process Gallery is open to the public and in time Veasley hopes to transform the studio"s surrounding landscape into a sculpture park.

Also in Kent Guy Hollaway designed a contemporary extension to his country cottage in Kent and has created a series of seaside houses in Margate that are intended to resemble traditional beach huts.