A jagged roofline and textured facades define a dual-purpose university facility by Perkins+Will in Kapolei, a growing town on the mountainous island of Oahu.

Housing both offices and educational spaces, the Administration and Allied Health Building is located on the University of Hawaii's West Oahu campus, which was formerly the site of sugarcane fields. The building acts as a gateway structure on campus and also book-ends a great lawn.

The project was designed by the LA studio of Perkins+Will, in collaboration with Hawaii-based KYA Design Group.

"The design of this building through its siting, its form and its engagement with the land was influenced by the ecology and history of its location," said Mark Tagawa, an associate principal at Perkins+Will, in a project statement.

"We wanted to create a facility that interacted with the landscape in a sympathetic way, through water management, landscaping and materiality."

Totalling 43,000 square feet (3,995 square metres), the facility consists of two wings joined by a connector element. One branch houses offices and unites administrators in a single location. The other wing contains general purpose classrooms and laboratories for various fields of science, including microbiology and organic chemistry. 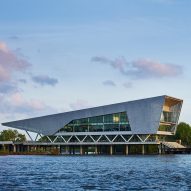 The building is composed of sculptural forms with gabled roofs. Walls are made of concrete masonry units (CMUs) that feature a geometric pattern inspired by kapa – a traditional Hawaiian fabric. "The intricate, playful geometry connects the building with the existing campus," the team said.

On the southern facades, the team incorporated deep balconies – called lanais – which overlook the great lawn and help shade the building. The lanais were envisioned as both gathering spaces and extensions of the classroom.

Inside the facility, the team created a variety of flexible spaces for working and learning. "The challenge was how to best consolidate the distinct functions of teaching labs and classrooms within the same building as office space for the campus administration," said Tagawa.

The landscaping around the building is meant to help restore the site's environmental integrity. Decades of tilling depleted the amount of organic matter in the soil, in turn decreasing its "ability to retain water and support new plant life".

"This project seeks to demonstrate the university's leadership and stewardship for new development in Kapolei," the team said. "It aspires to restore, heal and rebuild the topsoil through nitrogen-fixing planting, to implement onsite ecological water and nutrient management, and to regenerate and revive native landscaping."

Perkins+Will, an American firm established in 1935, has completed a variety of education and cultural facilities over the past couple of years. These include a waterfront building for a research organisation in Baton Rouge, a library surrounded by colourful strips in Toronto, and a trade training school in Ontario.

Photography is by Andrea Brizzi.