A new training facility in Canada by global firm Perkins + Will consists of two interlocking volumes embedded in a gentle slope, resulting in a split-level layout and different facades.

The Kawartha Trades + Technology Centre is located on the campus of Fleming College in Peterborough, Ontario. It offers training in fields such as carpentry, welding, plumbing and machining.

The centre is adjoined to the college's main academic and social facility – a rectilinear, bronze building dating to the 1960s. The two buildings are linked by a glazed gallery space.

Encompassing 87,000 square feet (8,083 square metres), the new centre was conceived as a gateway structure that aligns with other buildings on campus.

"Aligned with the main north-south axis of the campus, the building is conceived as a new gateway, inviting pedestrian movement from the student residences and recreational zone to the north," said Perkins + Will, a global firm with 24 offices worldwide. This project was overseen by the firm's Toronto office.

The educational facility is composed of two connected volumes of differing heights. "Conceived as two interlocking, splayed shed-like volumes, the building's form is loosely derived from an industrial typology," the architects said.

The building is nestled into a gently sloping site, with a split-level layout that stemmed from a desire to engage the topography.

Walls are clad in Corten steel, glass and fibre-reinforced concrete panels, which result in “a combination of rich natural tones and patinated surfaces that blend seamlessly with the natural surroundings”.

The main entrance is located on the north, which is defined by a massive roof overhang with a soffit faced with cedar. A circular cutout in the eave carries daylight down to an entry plaza.

On the west, the architects hung a screen made of weathering steel, which helps shade a glass facade. Exterior steps lead down to a sunken courtyard that is used as a teaching space.

The south facade is fully glazed, while the east elevation features a combination of glass and concrete panels.

Inside, the centre contains light-filled rooms and open layouts. Visitors enter into the upper storey of the building, which houses classrooms and a lounge area overlooking the lower level.

The lower floor contains a large, open area called the Learning Factory, which is illuminated by a series of clerestories. The space includes classrooms, workshops and offices — and is designed to be reconfigured as needed.

Within the "factory", the architects placed a four-storey cube totalling 27,000 square feet (2,508 square metres), which offers spaces for testing different systems and equipment.

"It helps to simulate a construction environment, where all the trades work together and can see each other's work," the firm said.

Sustainability was a key concern for the project. The team integrated a number of energy, water and resource conservation strategies.

It also incorporated elements that would serve as teaching tools, such as an exposed rainwater harvesting tank, and an accessible green roof with integrated wind turbines and photovoltaics.

These features enable "a more dynamic linkage between the building and teaching curricula of the college", the firm said.

Other university buildings in Canada include a Toronto engineering school by ZAS that is wrapped in a tessellated metal and glass screen, and an alumni centre in Vancouver by KPMB and HCMA that features fritted glass and rough-sawn cedar.

Photography is by Tom Arban and Scott Norsworthy. 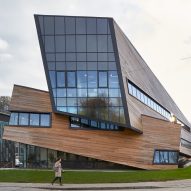