Grimshaw, the London-based studio behind the Eden Project in Cornwall, has unveiled its designs for an ecological resort on the seafront in Lancashire, UK.

Designed for Cornwall-based environmental charity Eden Project International, the coastal attraction combines a mix of indoor and outdoor experiences at a prominent location in Morecambe Bay.

"Morecambe Bay is a truly unique location of outstanding natural beauty, which in combination with Eden's distinctive approach will make this a landmark destination of national and international significance," said Jolyon Brewis, partner at Grimshaw.

Grimshaw is designing six attractions in China, the first of which will be in Qingdao. Beyond China, Eden Project International and Grimshaw Architects are also working to create outposts in Australia and New Zealand. 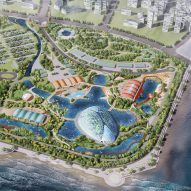 Each mussel functions as a glasshouse, containing different marine environments that will introduce people to the "internationally significant" natural environment of Morecambe Bay.

Elsewhere the attraction will have lidos and gardens combined with a mixture of observatories and performance spaces, which will be used to promote well-being. The complex is wrapped by of walkways and plazas, which extend down from the pavilions to connect the land and sea.

"We aim to reimagine what a seaside destination can offer, with a world-class tourist attraction that is completely in tune with its natural surroundings" added Dave Harland, chief executive of Eden Project International.

"We are extremely excited to be working with Eden Project International to help them deliver another transformational project," said Grimshaw's Jolyon Brewis.

"Morecambe Bay is a truly unique location of outstanding natural beauty, which in combination with Eden's distinctive approach will make this a landmark destination of national and international significance."

The developers hope that the scheme will mirror the impact of the original Eden Project in Cornwall, and help the regeneration of the area socially, economically and environmentally. Grimshaw's Eden Project opened in a former clay pit in St Austell in 2001.

More recently in Eden Project news, Studio Swine designed a nine-metre-tall "breathing" sculpture for the Eden Project Cornwall, which is inspired by the shape of cyanobacteria.