Grimshaw Architects has released the first visual of the Eden Project in Qingdao, which will contain the world's largest indoor waterfall.

The Qingdao Eden Project, planned for the city on the east coast of China, is currently being designed by the British practice as part of the ecological park's international expansion plans.

Themed around water, the £150 million park will feature the world's largest indoor waterfall. At more than 50 metre high the waterfall will be approximately the same height as Niagara Falls on the border of USA and Canada.

The park will be built on an area of reclaimed land originally used for salt production at the confluence of two rivers in the coastal city, where an angular International cruise terminal recently opened.

Jolyon Brewis, partner at Grimshaw Architects, told Dezeen, "the Qingdao Eden Project continues our approach of creating beautiful structures inspired by the efficiency of nature, made unique by the specific requirements of the location and theme."

The image was revealed as a development agreement was signed between Eden Project International and China Jinmao Holdings, which sets out design, construction and operation terms for the project.

David Harland, Eden Project International's chief executive, described the agreement as the "biggest step we have yet taken towards opening an Eden Project in China".

First announced in 2015, details of Eden Qingdao are now being revealed, with construction scheduled to start later in 2018 and an opening date set for 2020.

Grimshaw Architects designed the original Eden Project in a former clay pit in Cornwall, which opened in 2001.

The practice is currently working on four further Eden Projects in China. Along with the park in Qingdao, an outpost is planned for the historic city of Yan'an in northern China.

A further two projects are planned for Jizhou, near the coastal city of Tianjin, and the Sheng Lu Vineyard in Beijing.

Beyond China, Eden Project International and Grimshaw Architects are working to create outposts in Australia and New Zealand.

Further plans are due to be announced later this year for parks in the Middle East, while Eden Project International also has plans to create further parks in the US and Northern Ireland. 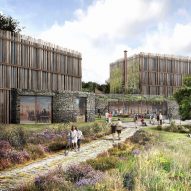