Built on a new 150-hectare artificial island reclaimed from the open waters to the north-east of Hong Kong International Airport (HKIA), the building acts as an "architectural front door" to the city from the recently completed Hong Kong–Zhuhai–Macau Bridge.

"Careful thought has therefore been put into how users will move around the site."

The building has an undulating standing seam roof, designed to reflect the surrounding landscape, which is made from aluminium with painted extrusions and prefabricated off site.

Inside the building, which opened last month, RSH+P has created a simple, clear circulation enhanced by full height atriums that allow natural daylight to penetrate to the lower level and ensures there is a visual connection to the curved roof form.

The architect said that the 90,000-square-metre building was conceived as an "architectural front door" and a "celebration of travel" surrounded by water with views to a natural skyline of evergreen mountains and hills.

The transport interchange and immigration control building is close to the Hong Kong International Airport and other transport links, including the SkyPier Ferry Terminal, the MTR's Airport Express and Tung Chung line.

"I am delighted to have worked on such an innovative project which brings beauty and elegance to the everyday activity of travel," said RSH+P partner Richard Paul who led the architectural team.

"The new crossing will benefit those living and working in the region greatly with enhanced connectivity as well as highlighting the contextualised sensitive roof form which responds to the undulating mountainous backdrop of such a beautiful local environment." 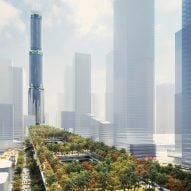 Originally the HKZM Bridge was due to open in October 2016, but the mega infrastructure project was plagued with delays, design and safety concerns, and reports of worker deaths and injuries.

In April of this year Hong Kong's Highways Department rebuffed claims that the concrete blocks protecting an artificial island connecting the Hong Kong side of the bridge to the tunnel under Mainland China's waters have been damaged by waves.