Undulations in the green roof of the Macallan Distillery by Rogers Stirk Harbour + Partners hint at the bulbous whisky stills situated below.

Cut into the hills of Speyside, the new distillery sits on the Easter Elchies estate in Scotland, which has been home to the single malt whisky since 1824.

Costing £140 million, the centrepiece of the whisky-making building is a rippling timber roof formed of 380,000 individual components – almost none of which are the same.

"The vision was always ambitious, but this enabled us to challenge our own thinking to create something so dramatic and awe-inspiring," said Graham Stirk, senior partner at Rogers Stirk Harbour + Partners and lead architect on the Macallan Distillery project. 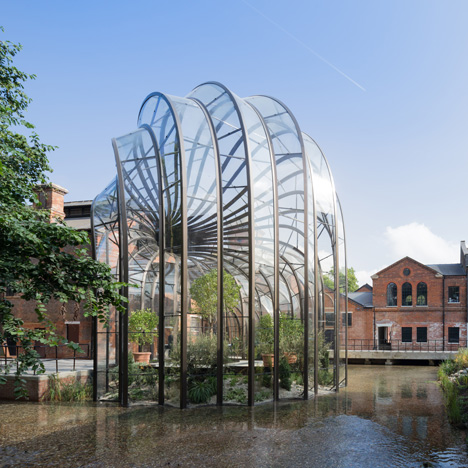 As Speyside is a designated Area of Great Landscape Value the distillery had to be sensitive to its environment, while still allowing Macallan to increase its production by up to a third.

By digging the building into the side of the naturally sloping land, the humpback roofs covered in Scottish wildflowers appear as a natural extension of the landscape. This also allows for unobstructed views of the Easter Elchies House, which was built in 1700.

A historic driveway has been reinstated for the new approach to the visitor centre, which takes guests on a journey that matches that of the whisky distilling process.

Barley fields are followed by oak trees, similar to those used for the signature sherry-aged casks, before meeting a stone pavement and water feature representing the fresh spring water and local that's also a part of the process.

Under the complex roof, the building is divided into five cells. The visitor centre is topped by the taller roof crest, with the smaller ones over three still houses and the mash house.

The modular approach means future extensions to the facilities should be relatively straight forward.

Arup provided the engineering services, Speirs and Major were lighting consultants and the landscape architects Gillespies.

The opening of the distillery comes at news of Macallan's 60-year-old whisky fetching £756,000 at Bonhams' Hong Kong auction house last week – the most money a bottle of the spirit has ever fetched.

The distillery occupies a Victorian mill used to produce paper for English bank notes, while two sculptural glasshouses added during the renovation enhance visitor experience are used to grown botanical ingredients used in the distilling process.

Photography is by Joas Souza.