The inaugural Fikra Graphic Design Biennial, in the UAE emirate of Sharjah, shows how the region can rethink its approach to adaptive reuse of buildings.

The first of its kind in the region, the month-long biennial has highlighted the wealth of graphic design talent in the Middle East region.

At the same time, installed in the city's former Bank of Sharjah building, it has also thrown the issue of regeneration in the UAE into the spotlight.

The dilapidated 1970s building and its neighbours – considered by many to be important examples of Arab modernism – are due to be demolished next year to make way for a new restoration project that promises to bring back the city's historic quarter.

However, according to the biennial's organisers, authorities could be reconsidering their plans for the building's future following the exhibition's success.

Biennial is "an eye opener"

"The significance of doing something like this is that it's an eye opener," said Tarik Al Zaharna, the architect that led the transformation of the old bank.

"The biennial has set a precedent," he told Dezeen. "I had a conversation with someone who said 'we have empty buildings that we don't know what to do with' and this is really interesting for us."

"For architects elsewhere, it seems obvious to reuse them, but for people here, that's just not how they think. They've never been trained to think that way, as they have plenty of land and permission to build."

They chose to hold the event in the bank building, after discovering it among a cluster of derelict buildings on the city's waterfront. The modernist building stood out, with its sand-coloured facade and tiers of curving balconies decorated with a swooping serpent-like graphic, added by street artist eL Seed in 2015.

Al Zaharna's Dubai-based practice T.ZED Architects was charged with transforming the building into an exhibition venue, with restrooms, a bar and a working lift.

"No one thinks about reusing a building"

According to the architect, this type of commission is rare in the UAE. Unlike in Europe, where refurbishing, re-appropriating or reconstructing parts of a building is commonplace and often necessary due to a shortage of land, here land is plentiful and planning for new buildings is easily granted.

"Dubai is a place where anything can happen and that's great for us, but no one ever really thinks about reusing a building," he said.

"Typically, the way that architecture and spaces are approached here is that if you need a new space or you need an architecture to host something you create it – you build it from scratch," he explained.

Yet Sharjah, located just an hour's drive away, offers many opportunities for adaptive reuse.

Although the bank had been derelict for some time, it was still in a useable condition.

"The bank building still had an office fit-out and looked as if everyone had left overnight," said Al Zaharna. "You could switch on the AC and it worked, the phone still had a tone. There were office objects and artefacts, servers – everything had been left in place after the financial crisis eight years ago."

Refurb creates chance to showcase both old and new

Jana Shamseddine of T.ZED Architects, who was appointed lead architect on the project, ensured that much of the office furniture and fit-out, including the original safes, were retained. In places, the nostalgic interior corresponds with the the graphics being exhibited, including the early work of Sharjah-born, self-taught designer Hisham Al Madhloum who designed the first logo for Sharjah TV.

In the space of just two months, the team were able to transform the interior into a flexible exhibition space that blended original features with new interventions – something that would never have been achieved in a new project.

For example, the stone entrance counter on the marble-lined ground floor was protected and exhibited behind plexiglass. In other places, patches of original tiles and wallpaper were preserved.

"It took 15 days to strip out the whole building – it was a fast-track demolishing process," said Shamseddine. "We were making decisions on what to keep and what to dispose on site. For instance we had a shaft that we weren't sure was structural or not and therefore if it could be removed until the last minute. The coordination was on a daily basis."

The departments were not only a humorous nod to the country's real life governmental departments – the UAE has ministers of state for happiness and an Office of the Future – but also the building's own administrative past as a bank. 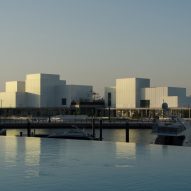 Within these departments, spread across five of the building's levels, the exhibition showcased the work of over 40 designers from 20 countries.

Although each floor had its own distinct character, the first floor was where most of the building's original finishes and fittings were left visible.

Here, the biennial's archival display showcased a series of cutting-edge magazines that were produced in the 1970s, demonstrating how progressive the city was during this era. All of the titles were eventually banned in the 1980s.

According to Shamseddine, both the exhibition and its contents have highlighted how much heritage there is in Sharjah to preserve.

"These buildings are from the 1970s and they reflect a very important era in the UAE, when these buildings were in Sharjah, Dubai didn't even exist, they predate almost every building in Dubai, so it's quite significant," she explained.

"Sharjah was the hotspot that everyone would go to in the '70s and '80s before Dubai became what it is now. Everyone was there. So to completely eradicate that from the history is unfortunate."

Shamseddine believes that the bank and its neighbours, which surround a square currently being used as a parking lot, could all be replanned and rejuvenated, to turn the area into a vibrant cultural hub.

"Bank of Sharjah is one example but if you look around the city there are endless typologies that are abandoned now, but if they are used they can activate all of the areas around them and draw people to that part of the city," she said. "Even now with the Fikra Biennial, it is drawing people to an area of the city where no one would typically go."

"The authorities gave us this building to do with as we wish, as it was going to be demolished anyway, but since they've seen what we've achieved, they are rethinking whether it should be demolished or not," she explained.

"The project has opened the eyes of the authorities and developers as to how these spaces can be reused directly. They see the opportunity that comes out of these spaces where maybe, just because they saw it in a very different context before, they couldn't tell that there is so much opportunity within these sites."

Change in mindset needed for architects in UAE

The biggest challenge now, according Al Zaharna, is finding other architects willing or able to work on these types of projects. There are currently no local architects specialising in restoration because there is no demand for it.

"We have tens of thousands of new units being developed every year as the plan to develop and to grow the city of Dubai and Sharjah. But very few people are actually willing to take the time to refurbish and look at successful buildings that have been in place for the longest time," he said.

"They are not necessarily bad buildings, they are just old. It's more complex and more costly but all it takes is a little bit of thinking and a lot of work. The culture we have here in terms of approaching architecture is very different."

"Developers might think, we can't restore this building because there aren't any architects to help us do that," he said.

The Fikra Graphic Design Biennial was on show from 9 to 30 November.

Also unveiled in November was the Jameel Arts Centre, located in the neighbouring emirate of Dubai. Designed by London firm Serie Architects, the "very un-Dubai" building is one of the first independent not-for-profit contemporary arts institutions in the city.