American artist Mazzotta designed the retractable 100-seat theatre to fold out of a disused storefront in Lyons – a small town in Nebraska.

The project won because it demonstrates how a simple architectural idea can have a positive impact on the local community, according to Mexican architect Rojkind, who was chair of the Dezeen Awards master architecture jury.

"There was a rich conversation about why this should be the winning project and in the end it was not about how big the project was or how complex it was," he explains in the movie, which Dezeen filmed at the judging day earlier this year.

"It was about an idea, how a simple element such as a wall can become a theatre and integrate the sidewalk and the street."

The opening mechanism for the theatre is powered by two hydraulic cylinders, which enable the structure fold out over the sidewalk to create space for 100 people to sit.

The retractable seating system is paired with a moveable screen to become a cinema. But since its completion, The Storefront Theater has also hosted video-game nights, music concerts and other community events. 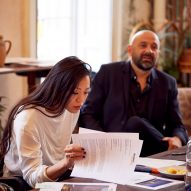 "It’s a project that deliberately goes out on the street and asks people to come in and activate it," Rojkind says.

"It's a project that is designed specifically for people to come together."

Mazzotta's motivation for the project was to breathe new life into Lyons' main shopping street, which has suffered a decline in recent years as pressure from chain stores and online retailers has forced independent businesses to close.

Mazzotta received a grant from Artplace America for the project but also received support from the local community, who donated money and volunteer hours to help construct the theatre.

Rojkind says that the project epitomises an increased concern for local communities that this year's architecture shortlist revealed.

"If we start having buildings that add value to communities and street life, we will have better cities in general," he says.

Mazzotta, an MIT graduate, is known for his kinetic installations. He claims his work sits "at the intersection of art, activism and urbanism".

Previous projects include a house that unfolds to provide seating for an open-air performance space in Alabama and an outdoor pavilion with a cloud attached to its roof in Missouri.

Thirty-three winners, spanning architecture, design and interiors, were announced at the Dezeen Awards ceremony in London on 27 November, hosted by British comedian Sir Lenny Henry. Each winner was given a unique, hand-made trophy designed by Atelier NL.