American firm Bohlin Cywinski Jackson has completed a house in Miami Beach, with a flat roof, glass walls and pilotis, all evocative of the region's modernist architecture.

Features that follow this style include the rectangular plan, the series of pilots that support the flat-roofed structure, and large expanses of glass.

"The clients, who own a winery in Santa Barbara, California, asked for an indoor-outdoor experience set within a tropical landscape that creates a sense of being on the water," said Bohlin Cywinski Jackson in a project description.

Therefore, San Marino Residence is open and exposed at the rear, with ample outdoor areas and a lap pool on its top level. The long, thin pool features a dramatic 18-foot (5.5-metre) cantilever that follows the home's primary axis, and also includes a glass end wall and glazed portion of its base.

From the front, the house is concealed with a gated entrance and lush foliage for privacy. A covered, outdoor walkway runs parallel to the pool above.

The narrow wedge-shaped plot informed the spacial design of the house, while rooms are organised to frame views of the water. Three bedrooms are located upstairs, and a single-storey guest and office wing runs along the property's eastern edge. 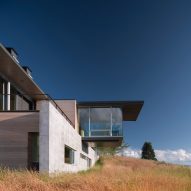 On the ground floor is a spacious, open-plan space with a sitting area and kitchen overlooking the bay. The entire home features white, light wood and grey surfaces.

"A minimalist palette of concrete, Ipe, white oak, and limestone serves as a neutral canvas and complements the home's tropical landscape," said Bohlin Cywinski Jackson, which worked with locally based Deborah Wecselman Design for the interiors.

On the main level, a portion of the ceiling is clad in light wood to soften the space, and spans from the kitchen to the living room. This gesture is duplicated in the master suite on the floor above, but on the ground, with a portion in light wood and grey tile.

A large, grey sectional by Minotti anchors the living room, next to a black coffee table from the same brand, and a rug by David Sutherland. A white marble dining table by Meridiani is surrounded by eight, light blue upholstered chairs.

A series of round, white pillars run through the centre of the ground floor for structural support. These also partially divide the dining area from the kitchen and sitting area.

Large glass doors around the room open to a rear patio, which is covered by a massive overhang formed by the roof, and which acts to mitigate solar heat gain inside.

Bohlin Cywinski Jackson has created several houses across North America that similarly take cues from modernism. Other examples are a grey hilltop home in Wyoming, and a black holiday retreat in Ontario with light wood interiors.

Photography is by Jeffrey Totaro. 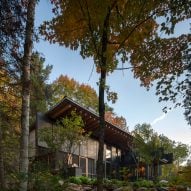