After another turbulent year for the world, comforting cuddly furniture was a standout trend at last week's Design Miami fair, where several galleries showed snug sheepskin seats and cozy cocoons.

A giant furry rug is draped over an iron frame supporting cushioned volumes, and accompanied with sheets of glass to produce this combined day bed and coffee table. Designed by Barcelona-based Guillermo Santomá, the white sheepskin carpet reaches over 3.5 metres in length, and would be an ideal centrepiece for a wintery retreat or ski chalet.

Brazilian designers Humberto and Fernando Campana teamed up with American artist Kaws to create limited-edition versions of the brothers' soft-toy chairs. Pink and black cartoon-like plush figurines, typical of Kaws' work, are clustered together to create bowl-like seats for users to nestle into.

Railings by Aranda\Lasch
Gallery All, Beijing and Beverly Hills

Part of a wider series of furniture formed from twisted metal tubes, these chairs by Aranda\Lasch are softened by faux fur that wraps around their seats and backs. The versions shown by Gallery All feature two-tone grey fibres paired with golden-coloured supports, but designers hinted that they are also working on an entirely fur-covered edition.

Soft fleece lines the inside of this peanut-shaped cocoon by South African designer Porky Hefer, and also covers the dip on top to act as a kind of saddle. Although the rest of its exterior is wrapped in tan leather, the snug interior of the hanging James Brown piece is akin to Hefer's previous cuddly lounge chairs, based on endangered animal species.

No strangers to tactile materials, the Camapana brothers also presented a sheepskin-covered version of their 2015 Cocoon swing chair as part of the Objets Nomades collection from Louis Vuitton. The updated design comes in a blue-turquoise colour, and with snug long-hair lambskin cushions "for cosy, yet elegant comfort". 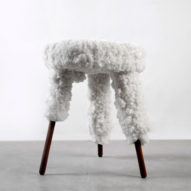