American rapper Childish Gambino has built a multi-sensory "wellness centre" that encourages festival-goers to relax and reconnect with one another.

Called Newcastle Wellness Centre, the installation was made up of three large-scale structures: a white room, a blue room and a red room.

The white room functioned as an introductory space where visitors would be greeted by Maori natives from the surrounding area who explained the concept of the installation to guests.

The space was also used to exhibit the rapper's upcoming fashion collaboration with Adidas Originals.

Next up, visitors were taken into a blue-coloured room, titled the Truth Room, which featured cylindrical, fabric tubes hanging from the ceiling.

Guests were invited to stand in the shrouded booths, which were connected to one another. Once inside, festival-goers were encouraged to interact with each other using a series of probing questions, intended to inspire social interaction. 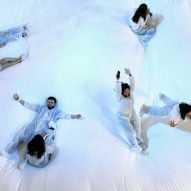 "Pharos is grounded in challenging the festival format from the way guests use the campsite to encouraging digital downtime and creating opportunities for real-life interactions, and an experience to reconnect with the natural state of being and the surroundings," said Superimpose Global.

"The premise was to leave the outside world behind, which meant behaving and socialising in a different way," explained the studio.

"Removing all visual cues, people let go of their assumptions and connected with new people, revealed secrets and made friends. All visitors were guided by staff to ask questions that explore their sense of self, relationship with time and more," said Superimpose.

Illuminated with a red light, the final room was covered in "ultra-soft materials" meant to relax guests. A four-hour soundtrack by Childish Gambino collaborator Xander Singh served as accompanying music for the experience.

Made in collaboration with Adidas Originals and London-based creative agency Superimpose Global, the aim of the installation was to incite festival goers to "reconnect to their natural state of being".

"We are selling real intimacy. We protect the experience and it becomes something you genuinely share with the people around you and you take away something special," said Childish Gambino, who's real name is Donald Glover.

"Pharos is meant to be a communal space – a place that evolves and reacts to the culture," he explained.

The Newcastle Wellness Centre took place at Pharos festival between 23 and 25 November 2018.

Similar recent installations include one by fashion designer Anya Hindmarch, which saw her install a giant cloud-shaped beanbag in a stately building during London Fashion Week, with the intention of relaxing people during the frenetic week of fashion shows.