Toronto firm StudioAC has outfitted this apartment in an old candy factory with custom arched volumes, exposed elements and white rooms throughout.

The one-bedroom Candy Loft is located in the converted, former confectionary building on a busy street in Toronto's downtown west end. The project measures 1,686 square feet (156 square metres) and is a "hard loft conversion" of a unit on the second storey.

"The site was converted into lofts some time ago and the units are really quite coveted," said StudioAC co-founder Jennifer Kudlats told Dezeen.

"The upward glow of the lighting highlights the curve overhead as you move through the extruded thresholds," said a project description.

The rounded hallways create visual buffers and emphasise transitions from public to private areas. The result is a combination of open-plan and enclosed spaces, with new rooms built around corridors and other divides.

Upon entering is a foyer, coat closet and bathroom. The first of two arched hallways leads to the heart of the home. Natural wood in the corridors is replaced with cool concrete floors elsewhere, while white walls and ceilings tie the whole project together. 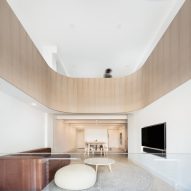 An open-plan kitchen, dining and sitting room make up the main living space, which is surrounded by large windows and exposed brick walls, painted white.

"The plan uses an entry corridor and the location of the service areas to buffer the living space from the rest of the building – resulting in a very serene ambience lined with large windows overlooking the canopy of the trees," said the description.

A kitchen island is wrapped in more Douglas fir boards, in keeping with the hallway, and has a white countertop and rosy copper nobs. This central island increases the amount of food preparation space, and overlooks an eight-person dining table.

A grey L-shaped sectional sofa anchors one side of the main living room and matches the colour of the original concrete floors.

On the other side of the apartment is an office, sectioned off from the dining room behind a wall. A low, white storage volume echoes the nearby kitchen cabinetry.

The apartment's second corridor is located in between the kitchen and living room, providing access to a bedroom on one side, and a walk-in closet with a double-sink bathroom on the other.

StudioAC has completed a handful of residential renovations in Toronto, including a minimal loft in a converted old church and a bright airy abode within a Victorian brick house.