Sunland Group has said it will not fight a court decision to block the Grace on Coronation development, ending a long running battle to build the trio of tapered riverside skyscrapers, which were initially announced in 2014.

"The group respects the decision of the court," said the group's managing director Sahba Abedian in a statement.

"We are now directing every effort to conceive a new architectural outcome that celebrates the unique riverfront site and contributes to Brisbane's coming of age as a true international city."

The three towers – two 24-storey and one 27-storey – broke the height limits set in the Brisbane City Council planning scheme by 12 storeys. However they were initially approved due to the provision of public space at the the base of the structures.

An initial appeal to stop the development was rejected by the Planning and Environment Court, but the decision was overturned by in May by the Court of Appeals, meaning the project will not go forward. 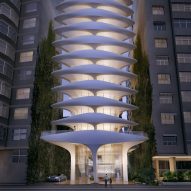 "When we lodged our development application in 2014, our vision was to introduce world-class architecture and community parklands to the inner-city riverfront site, which has been closed to the public for more than 160 years," said Abedian.

"Dame Zaha Hadid was truly one of the most creative designers of our generation and leaves behind a legacy of unique architectural works that will inspire generations. Unfortunately, Brisbane will not form part of this legacy."

The three towers would have created 486 apartments and eight "villas". This would have been set behind a multi-layered facade, featuring a glazed curtain wall overlaid with a pattern created from glass-reinforced concrete.

"The design tapers each structure to minimise their footprint and open the riverfront to the public, creating a vibrant civic space for Toowong within a new riverside park," said Zaha Hadid in a statement when the design was unveiled.

The decision to abandon the trio of towers followers the developer withdrawing its plans to build another two Zaha Hadid Architects-designed skyscrapers 50 miles south of Brisbane in Gold Coast.

Announced in 2015, the pair of 44-storey towers were planned for the Mariner's Cove redevelopment, home of Sea World. The scheme was withdrawn in 2016 to allow a consultation with the Gold Coast City Council, which lead to a masterplan restricting development on the site to three storeys.

Earlier this year Zaha Hadid Architects' first project in Brazil was also scrapped after a succession of delays.