Property developer Landream has unveiled designs by Zaha Hadid Architects for a 54-storey skyscraper in Melbourne, featuring a volume broken up into four curved segments.

Proposed for 582-606 Collins Street in the city's central business direct, the mixed-use tower will house shops, offices and apartments, and is designed to look like "a series of stacked vases".

Hadid is teaming up with local studio Plus Architecture on the project. It is expected to become the London-based architect's third building in Australia, following skyscrapers in Brisbane and Gold Coast. 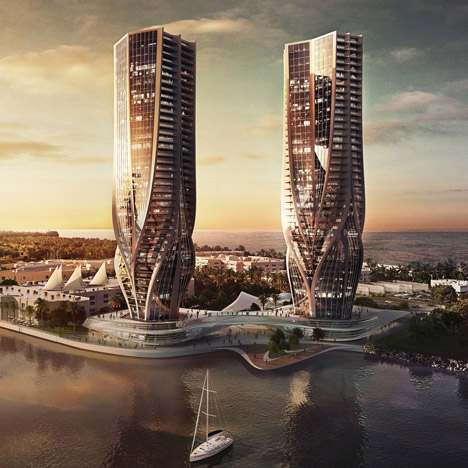 The tower's glazed exterior will be clad with a filigree facade system that forms a colonnade at ground level. This will also act as a sunshade, helping to reduce the building's solar gain.

Each "vase" will accommodate a different function, and the tapered forms will create three large elevated terraces. There will also be a public plaza surrounding the building's base.

According to Landream, the aim is to "embody and emulate the finest examples of historic architecture that can be found within the Melbourne CBD, yet reinterpret them in a contemporary solution that is driven by the building's structural integrity and the logical division of its overall volume".

"Central to the concept is the break-down of the vertical volume by the design team to establish a coherent relationship between tower, podium and surrounding streetscapes," it said.

The aim is for the building to use 50 per cent less energy than a conventional mixed-use tower, through the inclusion of high-performance glazing, efficient central cooling, low-energy lighting and grey-water reuse systems.

The structure will be located alongside Elenberg Fraser's 27-storey Liberty Tower and Bruce Henderson Architects' 69-storey tower at 568 Collins Street.

A new pedestrian route will be created to connect Collins with Francis Street. The scheme also includes 350 bicycle spaces, and parking bays for electric vehicles and car clubs.

Landream submitted a planning application for the Collin Street skyscraper on Friday 18 December.

Hadid also made the news this week after the replacement for her axed Tokyo stadium was revealed. She responded by accusing Japanese authorities and architects of colluding over the project.