Two nightclubs in Berlin are planning to provide an overnight respite for homeless people this winter, when temperatures can drop to below zero in the city.

The clubs in the borough of Friedrichshain-Kreuzberg want to open to rough sleepers for one night a week between January and February 2019. Bi Nuu would house up to 15 women, and Astra Kulturhaus could accommodate 25 men.

Brandt is finalising the details of his plan with GEBEWO, a non-profit that provides sleeping places and counselling to rough sleepers in Berlin. It is part of the state-funded cold emergency organisation Berliner Kältehilfe.

"[It's] great when clubs make such offers and take on social responsibility," Sara Lühmann, press spokeswoman for the district office of Friedrichshain-Kreuzberg, told Der Tagesspiegel.

"We are happy about every additional offer to further expand the number of cold weather places." 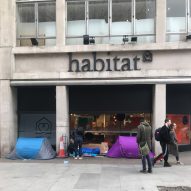 Temperatures can reach below freezing in the German capital, with an average minimum of minus two degrees celsius in January and February. Homelessness charities in Berlin have reported a sharp increase in the number of rough sleepers using their services.

Increasing levels of homeless are being seen in cities across Europe, including Berlin, in recent years.

In 2017 CityLab reported that a tent city of rough sleepers had been dispersed in Berlin's Tiergarten Park, with the city authorities paying for bus tickets to encourage homeless migrants from Eastern European countries to leave. Some of the rough sleepers were employed, but unable to find accommodation in a city where rents have been rising fast.

London is also facing a homelessness crisis, with the number of people sleeping on its streets doubling in the past five years. Dezeen spoke to people who were living in tents outside shops in central London.

The UK government has just announced funding for a network of 11 Somewhere Safe to Stay hubs offering assessments and services across the country. Today it was confirmed that a homeless man has died after collapsing outside of London's Houses of Parliament.