Architects should use their influence to help bring an end to London's homelessness crisis, said housing specialist Peter Barber in an exclusive interview with Dezeen, but admits his projects are "just scratching the surface" of the problem.

Barber has designed numerous homeless housing projects in London including Mount Pleasant and Spring Gardens schemes. However, he is aware that these projects are only a small part of what needs to be done to solve London's homelessness crisis.

"The hostel projects are really rewarding and they feel like big achievements, although it's a bit of a Band-Aid," he told Dezeen.

"I'm quite pleased with the designs, but the danger is thinking 'oh that's nice, aren't we good?' when it's just scratching the surface," he added.

Everyone responsible "for sorting the situation out"

His own practice, the eponymous Peter Barber Architects, has developed a reputation for building sturdy, beautiful social housing as well as homeless hostels. The studio's McGrath Road project in London recently won the RIBA Neave Brown Award for Housing.

Barber estimates he has designed buildings with 250 rough sleeper bed spaces in London during his career of 40-plus years.

The Greater London Authority's best estimate is that more than 11,000 people slept rough in the city between April 2020 and April 2021, with outreach workers spotting 7,531 people bedding down outside for the first time during that period.

Barber believes that everyone bears "responsibility for sorting the situation out", but that architects have "direct access" to make an impact on helping to solve homelessness in London.

"I think it's important not just to see ourselves as architects," said Barber. "We are also citizens. And those two things go together."

"So I feel like anybody feels, I suppose, as they step over somebody [sleeping rough] as they come out of the tube," he continued. "I feel a great sense of guilt about that."

Barber began studying to become an architect in the late 1970s when "things were actually a lot better" for housing in the UK, he said.

Since then, the housing market has been marked by a steep decline in the proportion of people living in social housing, principally as a result of Margaret Thatcher's Right to Buy policy, which allows council tenants to purchase their home at a large discount.

Housing experts have linked an undersupply of social housing to the steady rise in homelessness witnessed since 2010.

"All those people who enjoyed the benefits of living in social housing don't have that anymore," reflected Barber. "It's quite dispiriting that on our watch, we've seen things become so problematic.

He wants to see the Right to Buy scrapped and for the government to launch a "new public housing programme" focused on rejuvenating deprived urban areas where homes sit empty as well as new supply.

In addition, he would like an enhanced role for housing co-operatives working on small, local projects.

"One is full of admiration for the postwar generation building vast 150,000 times a year in the social sector," he continued. "But maybe if we do have a new programme, it could kind of bubble up from beneath with money from above."

Barber began his career as a practising architect under the guidance of the late architect Richard Rogers, before moving on to work for architecture studio Jestico + Whiles where he gained a "great deal of experience in housing in London".

Those experiences, he said "taught me to always challenge a brief and really try to look beyond the constraints as they're presented, and to add your own ingredients, not just to take things at face value".

His first solo project was a house in Saudi Arabia, which led him to be commissioned for Donnybrook Quarter, a housing scheme Barber describes as the studio's breakthrough.

He founded Peter Barber Architects in London in 1989. The studio has operated from a homely office in an old Victorian printworks since 2002. 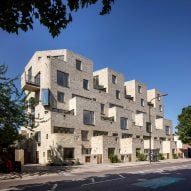 A glimpse of its extensive portfolio can be seen by looking through the office windows, behind which the walls are covered with architectural models and photos of almshouses, terraced housing and flats.

Today, the majority of his studio's housing projects are characterised by the transformation of tricky or neglected sites, the incorporation of public spaces and a mix of home types to meet different needs.

"I don't think affordable housing needs to be any different from any other housing," he explained.

"The other thing to be said is that there is no one size fits all."

His studio's projects are also known for their monolithic forms crafted from brick and concrete, which Barber said are intended to offer a sense of permanence, challenging contemporary housing developments in the UK that he describes as "half-hearted" and "framey".

"This is the idea of a building being really solid and permanent, that's one of the features," he said.

However, Barber anticipates these trademark material choices could soon change in light of the climate crisis.

"I'm not happy that we're building in brick and concrete," he explained, pointing to their carbon footprints.

He added that he is "very interested in timber construction", but using wood-based products is becoming increasingly inaccessible.

Regulations restricting the use of combustible materials introduced by the government and London mayor Sadiq Khan in the wake of the Grenfell Tower fire make it difficult for architects to specify timber.

His words echo those of Andrew Waugh, who referred to these policies as "a car crash", as they are preventing the move to low-carbon building methods.

Housing is "such a fascinating thing"

One thing Barber is certain will not change is the size of his studio. Since its founding, he has deliberately kept the team small. In fact, with between eight to 10 people, meetings there have previously been likened to "a dinner party", he said.

His decision to limit the size of the studio rejects the trend for creating giant architectural firms of the 21st century, and according to Barber, is an effort to uphold the standards of the studio.

"One of my objectives apart from trying to make some good architecture and make some money has been to keep the practice really small," he explained.

"I've worked from practices that have grown and their architecture got worse, and it's got less fun. And I wanted to avoid that, really," he said. "That happens every time." 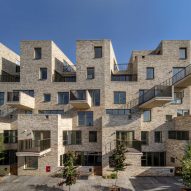 Sifting through photos of the studio's latest projects scattered over the meeting table, Barber added that he is confident his penchant for housing will also remain unchanged.

"Somebody did say to me once about 15 years ago, 'don't you think you should diversify?', and I'm thinking well, I just love it, I'm so happy doing it," he recalled.

"[Housing is] such a fascinating thing and sometimes the most everyday and ordinary things are the most interesting."

The photography is by Morley von Sternberg.