Barcelona home accessories brand Octaevo has launched a line of ceramic trays based on Greek and Roman gods as well as traditional symbols of good luck that are believed to fend off evil spirits.

The brightly coloured trays feature graphic prints depicting Apollo the Greek god of music, the Roman god of beginnings Janus, an eye-shaped amulet believed to protect against the evil eye called Nazar, and the Hamsa – an ancient Middle Eastern amulet that symbolises the Hand of God.

"All of these ideas inspire us a lot and so we visually translated them into the series of ceramic trays," Swiss creative director and Octaevo founder Marcel Baer told Dezeen. "May they bring the owners happiness, luck, health and good fortune."

Made in Spain from hand-fired ceramic decorated with gold paint, the trays are designed in Barcelona by Baer alongside his eight-strong creative team.

Baer said that the trays are designed to be used around the home as "catch-alls" for miscellaneous possessions such as keys and jewellery.

Founded in 2013 by Baer, who also runs his own studio, all of Octaevo's print designs are inspired by Mediterranean stories.

As well as ceramic trays, the signature prints are applied to other products including stationery, vases, coasters, cushions and tote bags.

"From our atelier in Barcelona we explore the wonders of the Mediterranean," Baer told Dezeen. "We are in search of enchanting concepts to inspire thoughtful design objects for contemporary living."

Earlier this year Pinar Yoldas created a series of nine 3D-printed models of designer babies based on characteristics of Greek gods and goddesses for her exhibition Genetically Modified Generation (Designer Babies) at the Istanbul Design Biennial. 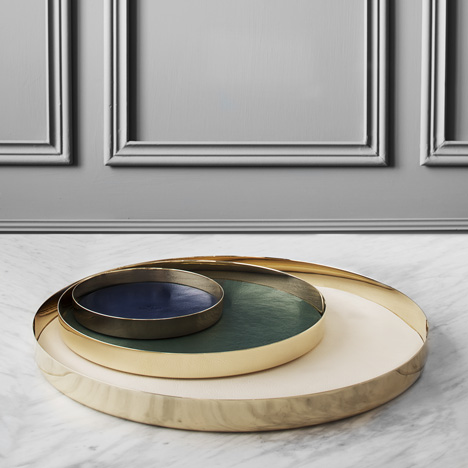 Yoldas, an assistant professor of Visual Arts at the University of California, created the models to question the prospect of genetically modified babies.