Designer and artist Pinar Yoldas has imagined nine designer babies based on the characteristics of hellenic deities as a reflection on human gene editing.

Yoldas, an assistant professor of Visual Arts at the University of California, designed the characters for her exhibition Genetically Modified Generation (Designer Babies) at the Istanbul Design Biennial, which takes place from 22 September to 4 November 2018.

The installation consists of nine 3D-printed models – one for each month of human pregnancy – which are designed based on the characteristics of gods and goddesses in Greek mythology.

Yoldas created the models to question the prospect of genetically modified babies.

"Gene editing of humans is not science fiction," Yoldas told Dezeen. "Jennifer Doudna, the inventor of this technology, believes that it won't be long before this technology reaches our doorsteps."

The characters are named after Greek gods and goddesses including Artemis, Aphrodite, Kronos and Kassandra. Each character is designed as if its genes have been edited to match the traits of its namesake.

"I grew up around ancient ruins in Hierapolis so hellenic mythology has always been of interest to me," said Yoldas. "As an Aegean I wanted to bring back these stories in a new form, which embraces the latest advancements in bio-technology."

Each character is displayed with an ID chart showing which genes have been edited. The heightened traits include beauty, fitness, empathy, memory, intelligence and popularity.

"One big question was, what are the qualities that we all collectively desire? And why?" said Yoldas.

"I saw an opportunity to create a narrative universe with these designer babies, which are almost like genetically modified gods and goddesses, yet they are not superheroes."

"With this piece I am sharing my excitement and curiosity," she continued.

"There are three themes among nine characters, time, talent and power. I would like the viewers to think about the interplay of these while getting more engaged in each character's background and future."

This year's Istanbul Design Biennial, called A School of Schools, focuses on how design can be used to tackle issues or rethink systems. 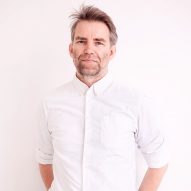 "As of 21st century, we have excelled at the design of the inanimate world," said Yoldas. "We have reached design perfection in lemon squeezers, carbon-fibre chairs, plastic trash bins, staircases, vacuum cleaners, phones, laptops and fitbits."

"I don't think the world needs any more designer chairs, watches, cars, sunglasses or sneakers, "she continued. "Don't get me wrong I love looking at this stuff but at the end of the day it is stuff that we no longer need. What we need is a design revolution where design reaches beyond the inanimate world to the living world."

"When architecture means new ecosystems, when design means new species, when art means new cells, what are we actually looking at?"

Now in its fourth edition, the biennial is curated by Belgian curator and educator Jan Boelen, who recently stated that the use of recycled plastic in design is "bullshit".