Paris-based homeware brand Trame has unveiled a collection of rugs and ceramics with pieces designed by architect Arthur Mamou-Mani as well as designers Amandine David and Wonmin Park that reference the historic Alhambra palace in Granada.

On show at cultural centre Institute Du Monde Arabe in Paris, the Tales of Imperfect Repetition collection references the tiles and patterns seen in the Alhambra palace in Spain, one of the world's most well-known examples of Islamic architecture.

According to Studio Vedèt co-founder Valentina Ciuffi, who was responsible for the artistic direction of the exhibition, the designs celebrate Trame's love for Mediterannean style and Spanish architecture.

"The incredible architecture of the Alhambra in particular are at the origin of a collection that interweaves history and contemporaneity more evidently than ever before," Ciuffi told Dezeen.

"Trame has set its eyes on the tiles which cover the walls of the ancient palace and on the three-dimensional transpositions of these infinite geometries, which give shape to the ceilings by ringing sequences of Muqarnas [ornamented vaulting]," she added.

The brand called on architect Mamou-Mani, Brussels-based designer David and Dutch designer Park to create pieces for the collection, which range from colourful tactile rugs with tassels to different-sized round vases.

As part of the creation process, all of the designers took a trip to the Alhambra, where they drew inspiration from its architectural forms and intricate interiors.

"While Islamic art made important mathematical discoveries much before scholars began formalizing them, one of the most fascinating aspects of its aesthetics is the infinite repetition of forms that creates mesmerizing, kaleidoscopic patterns," said Ismail Tazi, cofounder of Trame.

"Indeed, it is the geometric and mathematical origin of these artistic expressions that act as a common thread," he added. 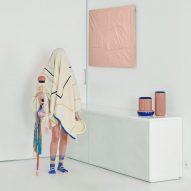 Trame debuts at Maison&Objet with collections inspired by "historical anecdotes"

Among the items designed by Mamou-Mani are several stackable cups. The architect first created prototypes of the objects at his studio in London, where he worked with locally sourced red clay.

Like many of Mamou-Mani's past works, including a sand installation in Saudi Arabia, all of the designs were then 3D-printed before being finished with glazing by hand.

David created a selection of black vases for the collection, while Park contributed white vases and candleholders.

For Trame's launch, Studio Vedet decided to collaborate with the studio Space Caviar to create a space that reflects the Alhambra.

They were attracted to Institute Du Monde Arabe because of its similarities with the Alhambra.

"The Institute Du Monde Arabe, which is the synthesis between Arab and Western culture, was absolutely perfect for the preview of the new Trame collection," Ciuffi explained.

"Probably one of the best architectures signed by Jean Nouvel, the space is perfect both symbolically and aesthetically to recall the architecture of the Alhambra and the concept behind this collection," she said.

Other recent homeware launches include a collection of rugs by Studio Agne that were created using textile dyes extracted from byproducts from industrial processing, and a range of vibrant tapestries by Chromarama that can be experienced by individuals with different forms of colour vision deficiency.

The photography is by Mattia Parodi.