Japanese studio Nendo has designed a set of bowls that appear "as if one is growing out of the other" for Chinese lifestyle brand Zens, along with a "seemingly unbalanced" tea set that hides under its lid.

The tableware, called Fungi, comprises seven bowls of different sizes that can be arranged in various ways to hold both food and objects.

The designers chose the unusual name because of the way the bowls, when stacked, seem to be growing out of each other like fungi.

"When combined, the bowls almost appear as if one is growing out of the other, or sprouting from the edge of another, reminiscent of the growth of mushrooms," said Nendo.

The larger bowls are intended to be used to serve or display fruit, whilst the smaller can carry dips or sauces.

The collection includes shallow bowls that could be used to float candles on liquid, or for other decorative uses, and bowls with deeper sides to contain flowers.

Plank has a similarly surprising appearance, as it is a "tea set that is secretly hiding under a seemingly unbalanced over-sized lid".

The designers wanted to play with the idea that the lid of a tea pot is usually the least important element, so they turned this on its head. 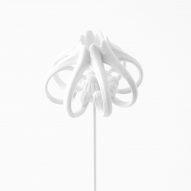 "The lid is normally considered as a supporting role, but this design was born by making the lid play the lead," said Nendo.

The spout and handle of the tea pot appear to be "growing from underneath the lid", but the wooden lid is in fact removable and held in place with a notch. This allows the pot to be picked up by its edges as well as with the handle.

As well as the tea pot itself, Nendo designed a cup, mug, sugar bowl, milk jug and carafe, all of which also come with a wooden lid. The lids of these other vessels can be used as saucers to prevent spillage when they are filled with hot liquid.

As the lids of all the elements are flat, each item can be stacked on top of the other for ease of storage.

Nendo, which is led by designer Oki Sato, also recently redesigned the humble ballpoint pen to make it more comfortable in the user's hand and to prevent the elements rattling during use.

Photographs are by Akihiro Yoshida.