Tim Teven's Recycling Reject project came about after he visited a paper recycling facility in the Netherlands and discovered that the recycling process created a huge amount of industrial waste.

A large number of fibres, such as plastic, wood and unrecyclable paper, are separated from the paper and collected as waste known as screen waste. Teven decided to focus on finding a way to reuse the unrecyclable paper to make building blocks that could be used to create furniture and other objects.

"I saw a place to introduce this industrial waste back into the life of the people that create the waste without even knowing it," he told Dezeen.

To create the blocks of material for his Recycling Reject project, Teven shredded the screen waste and combined it with mineral-based pigments and a binding agent before pressure-compressing the result into a series of moulds.

"The process involves fairly simple steps, which are energy efficient and don’t use too many resources," said Teven. "The good thing is that the fibres that are not fit for paper manufacturing are filtered out during the pulping process. That means that the waste fibre is clean of any solids as well as any chemicals, food substances or ink." 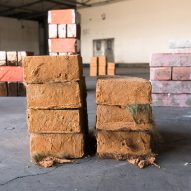 He worked closely with the Smurfit Kappa recycling facility in Roermond, which provided him with the raw screen waste for the project.

"It's very nice to see that as a designer you can be an eye-opener for the factory and create a healthy win-win situation for me, them and the environment," said the designer.

Teven said that the final material could be treated in different ways to produce different surface effects. He chose to leave the material raw to create his furniture prototypes for the Design Academy Eindhoven Graduate Exhibition 2018, held at the Campina Milk Factory in Eindhoven in October, including shelves, benches and tables.

Other projects on display during the exhibition included Lino Leather, a vegetarian alternative to leather for interior design use, and bricks made using human hair and manure from the Chiltern Hills in the UK, to draw attention to the potential of local manufacturing.