Designer Don Kwaning has developed a new material, called Lino Leather, that emulates the texture of leather for interior and furniture design.

The two versions of Lino Leather developed by Kwaning are the result of a series of material experiments with linoleum – known as lino – the compound material most commonly used as an affordable and hardwearing floor covering.

The first is a thicker version that emulates rumen leather, which is usually made from a cow's stomach, and has folds and a honeycomb structure. Kwaning has used this to create wall panels that have acoustic dampening properties.

The second is closer to saddle leather, a softer material more commonly used in commercial applications.

Kwaning's material is double-sided, with the usual textile backing that is needed to stabilise the material rolled between two layers of the compound so both sides have the same finish. Kwaning suggests it could be used in furniture design and upholstery.

"I took out all the pigments to give the material more depth, which also gives the Linoleum Leather a more natural look since the materials that it is made from show in the colour," said Kwaning.

"The colours that you see are the colours of the wood-flour which is one of the Linoleum Leather components," he explained. 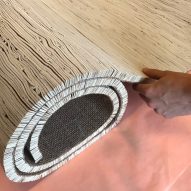 "Dark brown is a mixture of different wood species, yellow is pine wood and in the red sample I used one per cent of the regular amount of pigment that is used in linoleum. In this way the colour of the wood combines with the pigment, so you can choose a colour but the natural look remains."

Kwaning specialises in finding new uses for natural materials and teamed up with flooring manufacturer Forbo to develop new treatments for lino that could make it more versatile.

Linoleum is usually made from a compound consisting of plant-based oils and resins mixed with minerals or fine powders such as ground cork. The compound is set onto a textile backing, such as canvas, and can be tinted to create different colour finishes.

It is most commonly used as a floor covering due to its ability to withstand heavy usage thanks to the addition of minerals such as lime, and is usually smooth in texture.

Kwaning removed some of the materials from the compound and increased others such as linseed oil to change the properties of the lino.

"Linoleum is an overlooked material," Kwaning told Dezeen. "It is a material with great future potential."

Lino Leather was on display as one of two graduation projects by Kwaning during Design Academy Eindhoven's exhibition at Dutch Design Week. His other project, Medulla, focused on creating ecological packaging and design materials from the pith of the fast-growing soft rush plant.

"I like projects that aim to change the industry by introducing new ecological substitutes for existing materials that are toxic or harm animals," said Kwaning.

Designers, material scientists and entrepreneurs around the world have been working to find vegetarian and vegan alternative to leather in a bid to tackle some of the environmental and ethical impacts of traditional leather production.

Examples include Piñatex, which is made from the wasted leaves of pineapple plants, and palm leather made from palm leaves.