An embroidered computer and a sound recorder made from yarn are among the products produced as part of Ebru Kurbak's research project into the use of traditional textile techniques to manufacture electronic objects.

The arts-based research project, called Stitching Worlds, was put together over the course of four years by Vienna-based artist and designer Kurbak.

The five separate works were installed and showcased at the city's Yapı Kredi Culture Centre during this year's Istanbul Design Biennial. The works each explore textile technologies and traditions, such as knitting, weaving, crochet, and embroidery, and how they can be adapted to produce electronic objects.

Created between May 2014 and June 2018 at the University of Applied Arts Vienna, the series of projects were funded by the Austrian Science Fund.

The exhibition posed the question: What if electronics emerged from textile techniques such as knitting, weaving, crochet, and embroidery? And also: How would technology be different if craftspeople were the catalysts to the electronics industry, via textiles manufacturing?

The five projects were carried out with a large network of collaborators and in four parallel tracks of investigation: experimentation, theoretical study, speculation and reflection and dissemination.

Projects include a working 8-bit universal electromechanical computer that is embroidered from gold. Made from linen, gold, silver, copper, hematite and wood, the computer is handmade using a traditional embroidery technique and does not incorporate any regular electronic components.

In terms of its capacity and workings, the embroidered computer is comparable to early mainframe computers that were built in the 1950s.

Its computer circuit and simulation software was designed by Matthias Mold. Raimund Krennmüller created the generative pattern development, Susanne Frantal consulted on the use of embroidery, and Sophie Fürnkranz advised on the use of metal threads.

"The piece demonstrates the possibility to make a computer from scratch through long-established alternative materials and skills," said Ebru Kurbak and Irene Posch, who led the project. "Through its mere existence, it evokes one of the many imaginable alternative histories of computing technology and stories of plausible alternatives to our present daily lives."

Kurbak collaborated with So Kanno, Posch and Mold on a magnetic recording and playback device that can record and play sounds on yarns that contain steel fibers.

The Yarn Recorder's design resembles the wooden yarn-winding tools, such as a spindle, used to unwind hanks of handspun yarn onto bobbins or reels before the process of hand weaving.

"Hand spinning has lost its position as a necessity, at least in Europe, and has become a process for manufacturing luxury goods if not a hobby," said Kurbak.

"As a result, the societal value given to the process of hand spinning has drastically changed, as far to make it hard for us to conceive the influence of the simple spindle on the development of the complex and sophisticated technologies of today," she added.

"The Yarn Recorder intends to reveal this fascinating link through playful interaction, as a commentary on the changeability of the value of things."

Also on display was a series of four imagined tools that are designed to be used for new electronic textile practices. The Tools We Want include the Ohm Tailor's Tape by Kurbak, the Fingernail Strippers by Hannah Perner-Wilson, the Needlework Probes by Posch, and the eTextile Tailor's Scissors by Mika Satomi. "The tools on display, beyond being one of the many practical extensions to the artists' toolkits, are chosen for the way they visually communicate the straddled position of cross-disciplinary practices like electronic textiles, and form a commentary on socially constructed stereotypes about skills and competencies," said Kurbak.

Other showcased projects included Crafted Logic – a series of electronic components and objects produced in collaboration with a group of women in Turkey. Made by crocheting threads with conductive properties, pieces include electromechanical switches, logic gates, and an Algorithmic Logic Unit (ALU) for an electromechanical computer.

The experimental process focused on adapting the traditional local needlework techniques already practiced by the group of women, who are based in the rural area of Anatolia in Turkey.

The handmade crochet technique used to make the components is traditionally used to make items for a wedding trousseau by the bride and other female members of the family. Made over the course of several years, the wedding trousseau contains delicate objects, such as doilies, towels, beddings, tablecloths, curtains, and clothes.

"This tradition leads women to spend significant time practicing and gaining a high-level expertise, especially in crocheting, one at a time, circular, square, and hexagonal small 'motifs' to be combined into a larger textile object later on," explained Kurbak, who worked with Perner-Wilson, Posch and Mika Satomi on the project.

The final project presented by Kurbak was The Knitcoin Edition – an adaption of the well-known board game Monopoly that compares the shifting economic value of craft skills, such as brocading and hand-weaving silk, with the rise of immaterial money markets, such as cryptocurrencies, throughout history.

"Monopoly was originally invented as a critical tool to demonstrate the unfair consequences of the system it now iconically represents," said Kurbak.

"The proposal is to replace the game's paper play money with 'knitcoin' without changing the rest of the rules," she continued. "When players need play money, they must knit it. The installation invites the audience to speculate on the consequences of such a system." 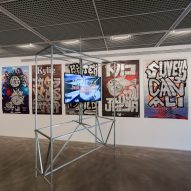 The five projects were presented alongside a live workshop where craftspeople practiced and developed textile-electronic objects.

"The Stitching Worlds workshop showcases the surfacing and maturing of a unique craft, providing a final opportunity for the craftspeople to revisit unfinished experiments that have remained in their minds," explained Kurbak.

As well as the final exhibition, the Stitching Worlds research project also resulted in a book, and a project blog.

This year's biennial, which ran between the 2 Sepetmber and 4 November was the fourth hosted by the Turkish city. According to its curator Jan Boelen, female designers made up 70 per cent of participants, proving that women are set to play a dominant role in the design world in the future.