Female designers make up 70 per cent of participants at this year's Istanbul Design Biennial, proving that women are set to play a dominant role in the design world, according to curator Jan Boelen.

"The future of design is female," Boelen told Dezeen, repeating a statement he made during a panel discussion during Dutch Design Week last year. "This is underlining it. It's confirmation of what I felt."

The Istanbul Design Biennial, which opened last week in the Turkish city, features projects by 120 lead designers. More than two thirds of these are women.

Seventy per cent of biennial participants are women

Boelen explained that following a call for entries last year, his curatorial team selected the best submissions and then conducted interviews or Skype calls with their shortlist. They were keen to ensure a good gender balance but didn't deliberately set out to select women over men.

"Seventy per cent of the participants are women," Boelen told Dezeen. "This is something we only discovered afterwards."

The curatorial team, which consisted of Boelen plus associate curators Vera Sacchetti and Nadine Botha, sought designers from Turkey and the Levant, and found that the unfamiliar names of designers from the region meant they were unable to discern their gender from their applications.

"We hoped we would have a good gender balance but that was not our first concern," Boelen said. "Our first concern was good projects. After selecting good projects we started to Skype and talk with them and then we saw, my God, they are all women! It was really clear that they were formulating the strongest projects."

By focusing on the eastern and southern Mediterranean region, the curators hoped to "formulate another reading of the design world, as it's very oriented to western Europe because of the schools that are there," Boelen said.

"We hope that by including other nationalities and perspectives, that we can create a different view on the design world itself." 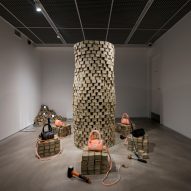 This year's biennial, the fourth hosted by the Turkish city, is titled A School of Schools. It features six themed "schools" that explore how networks of designers can formulate disruptive improvements to established systems such as material certification, disaster relief and even the concept of time. It runs in venues across central Istanbul until 4 November.

Gender balance under the spotlight

Female designers featured include Pinar Yoldas, who presents an installation of conceptual designer babies based on hellenic deities as a reflection on human gene editing and Charlotte Maëva Perret, who created an exhibition of soaps made by Syrian refugees and Albibaba.com luxury leather bags to question the cycle of global retail.

Gender balance in architecture and design has been under the spotlight in the past year. In November 2017 Dezeen published a survey that found that only 10 per cent of senior management positions in leading architecture firms are occupied by women.

We followed this up with an initiative called Move the Needle, which highlighted the lack of women on awards juries, at design conferences and among laureates of major prizes.

Besides being curator of this year's Istanbul Design Biennial, Jan Boelen is head of the Social Design masters programme at Design Academy Eindhoven in the Netherlands, artistic director of research foundation Atelier Luma in Arles, France and artistic director of Z33 House for Contemporary Art in Hasselt, Belgium.