Architecture firm K-Studio has designed a neo-modernist interior for this boutique hotel in its hometown of Athens, using local artworks and furnishings.

A member of Design Hotels, Perianth Hotel is K-studio's first hotel project in the Greek capital – a mainland addition to the firm's island-forward portfolio of restaurants and seaside resorts.

Located in Agia Eirini, a Byzantine-era square near the buzzing Monastiraki district, the hotel opened in November 2018 as a long-anticipated newcomer to Athens' boutique hotel scene.

The art deco building was constructed in the 1930s to house retail spaces, offices and apartments, without much regard for its future legacy.

Despite an irregular floor plan, its owners, the Sgoumpopoulos family, decided to convert the then-vacant building into a design-focused hospitality project – one that would help inspire a city recovering from economic crisis.

Anastasia Sgoumpopolous, who co-manages the property with her two siblings, commissioned childhood friends Dimitris and Konstantinos Karampatakis of K-studio to revive the building.

Its stripped-down interior exposes structural elements of historical value from the Athenian Modernist movement of the early 20th century. "The shape of the building is quite unusual, nearly octagonal, and we embraced that trait," Sgoumpopolous told Dezeen. 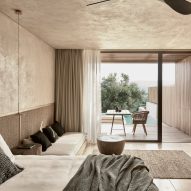 Mimicking the urban layout of the city outside its walls, Perianth Hotel's corridors form a main "avenue", from which guests can access their set-back rooms through smaller side "alleys".

The streamline moderne exterior – typical of late art deco buildings – was also internalised, as seen by the main circulatory route of each floor, designed to mirror the curve of the facade.

The hotel's 38 rooms range from 226 to 495 square feet (21 to 46 square metres), all with private terraces that survey the Athenian skyline. To compensate for the smaller size of the lower-floor guest rooms, ceilings were raised to be loftier relative to those of the larger rooms above.

The penthouse spans the entire sixth-floor at 1249 square feet (116 square metres), featuring a large private veranda with impressive views of the Acropolis. An irregular structural grid lends each room its own unique character, with obliquely-angled walls and unexpected nooks and crannies of space.

At the heart of Perianth Hotel's conceptual evolution was an emphasis on contemporary Greek culture, from the interior furnishings to staff uniforms. "When visitors come to Athens they mostly seek Ancient Greece, so we wanted a place where contemporary Greek creativity could thrive," said Sgoumpopolous.

Hallmark elements of the Athenian modernist movement extend through the decorative palette, and include terrazzo flooring, blush-velvet upholstery, and brutalist custom furnishings with walnut adornments and brass accents.

"It's more than just a personal preference, I'm trying to present a holistic idea of what contemporary Greek art and culture looks like," she said. Even the rooms' minibars are stocked exclusively with Greek products.

The concept extends to the hotel staff uniforms, crafted by Greek fashion designer Sophia Kokosalaki. Renowned internationally for her Ancient Grecian-inspired gowns, Kokosalaki deviated from her standard aesthetic to align with Perianth Hotel's concept, translating the building's Bauhaus elements into outfits with minimalist silhouettes and graphics.

The hotel is also home to Zen Center Athens, a non-profit institution owned by Konstantinos Sgoumpopolous, who has studied the Zen tradition for over 20 years.

Instead of being converted into additional rooms, the Zen Center will remain a practicing studio for Eastern spiritual studies, including meditation, martial arts and yoga. Free access to the studio is granted to Perianth Hotel guests for both classes and independent use.

K-studio has completed a variety of hospitality projects in Athens, including a barbeque restaurant where jam jars hang from the ceiling and a rustic pizzeria modelled on an Italian courtyard.

Photography is by Claus Brechenmacher and Reiner Baumann.