Orange-hued marble and pebble-dashed stone provide the setting for displays of leather handbags, clutches and purses in this boutique in Miami, which was designed by American studio Aranda\Lasch.

Aranda\Lasch outfitted the Miami Valextra store to reference the heritage and craftsmanship of the luxury leather label, which was founded in Milan in 1937.

The studio took cues from the materiality of Milan's palazzos and included a mix of marble, stone, metals and mirrored surfaces in the store located in Bal Harbour – a neighbourhood in the northern tip of Miami Beach.

"Valextra is rooted in its Milanese history, the detailing of their products is unparalleled in its execution, they are sophisticated in their understatement but at the same time sensual in their colours and patterns," said studio co-founder Benjamin Aranda.

Ceppo di Gre, a pebbled grey Italian stone, clads the front of the Valextra shop, and also lines the floor inside, where it is contrasted by the brighter hues of Arzo marble.

Thick cuts of the multi-coloured stone are supported by metal mesh to create podiums for displaying individual handbags. Miniatures of these structures featuring slender marble tops and shorter bases have been erected on a pink-painted wall to showcase more leather goods. 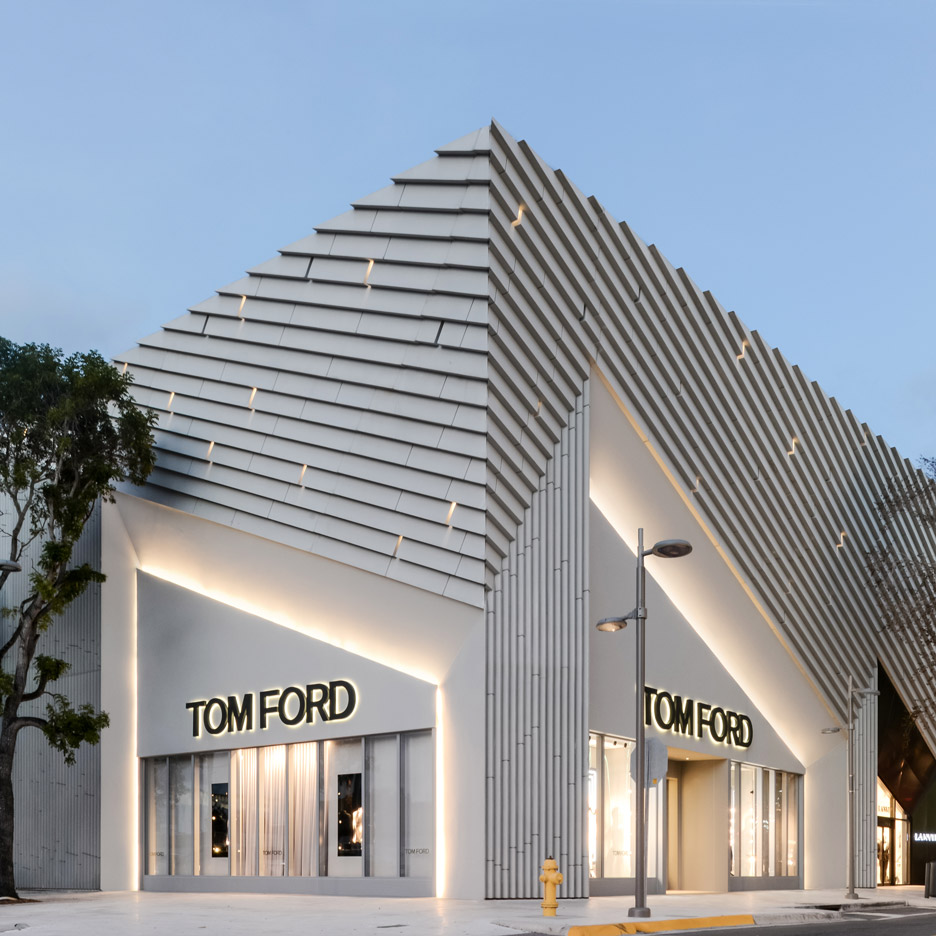 Mirrors cover the wall on the other side of the shop, while Arzo marble shelving runs all the way along the base. Metal coils that appear to loop through the stone form dividers for smaller products, such as clutches and purses.

Aranda\Lasch created additional shelving at the rear of the shop from a series of stacked geometric modules that stagger down in the middle to create a V-shaped opening to a mirror behind.

The installation also provides a nod to Italy as it is covered in a monochrome laminate known as Alpi, which was created by Ettore Sottsass – the famed Italian architect and designer who founded the Memphis group.

Other details of the store include a large opening in the ceiling. Spotlights around the perimeter are directed upwards to reflect off the fabric covering the ceiling to create a softened lighting effect.

Based in New York and Tucson, Aranda\Lasch is led by Aranda, Chris Lasch and Joaquin Bonifaz. Also in Miami, the firm has also completed a store for fashion designer Tom Ford in the city's Design District.

The pleated concrete shop us joined a host of luxury shops in the design hub, including a Christian Louboutin store covered in tree bark and a Dior boutique sheathed in curved white concrete panels.